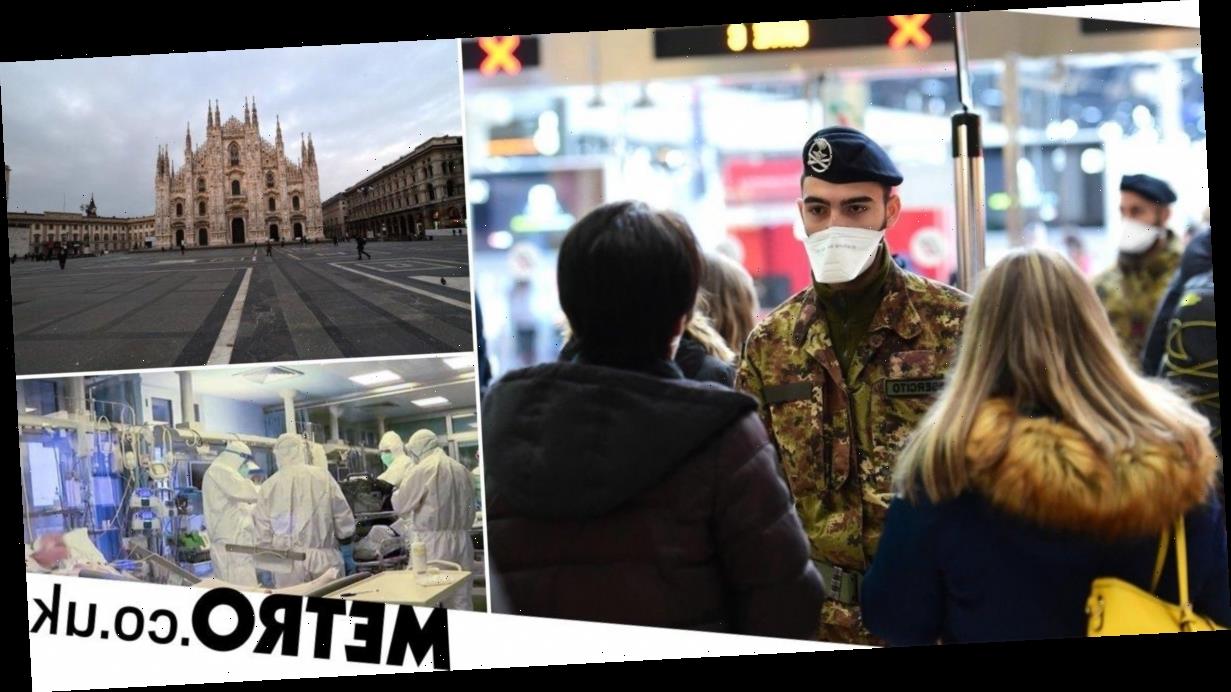 As more than 60 million Italian people woke up today under quarantine, some experts believe the UK could be facing a similar situation in about ‘two to three weeks’ if ministers don’t act quickly.

As of Tuesday morning, the whole of Italy was put on lockdown in a bid to stop the spread of coronavirus. A ban on public gatherings has been implemented, while schools, gyms, pubs, and theatres were closed and weddings and funerals will not be able to take place until after April 3.

Measures imposed by Italy have raised concerns that the UK could soon follow suit, after officials announced that Britons with a ‘minor’ cold, flu or fever symptoms might soon be asked to self-isolate at home.

Professor Francois Balloux, of the University College London Genetics Institute, said: ‘The trajectory in the UK is so far roughly comparable to the one in northern Italy, but with the epidemic [there] two to three weeks ahead of the situation [here].

‘It is possible that a lockdown strategy similar to the one imposed in northern Italy may be adopted by the UK. The Covid-19 epidemic cannot be contained anymore.’

The World Health Organisation (WHO) said although the threat of a pandemic is ‘very real’ it remains confident the virus could still be controlled.

England’s Chief medical officer, Professor Chris Whitty, said tighter measures could be introduced in the next two weeks, which will be aimed at protecting the public, particularly for the vulnerable and elderly. He said the government has now entered its ‘delay’ part of the plan to contain Covid-19.

Prof Whitty said: ‘We are expecting the numbers to increase initially quite slowly but really quite fast after a while and we have to catch it before the upswing begins.

‘We are now very close to the time, probably within the next 10 to 14 days, when the modelling would imply we should move to a situation where everybody with even minor respiratory tract infections or a fever should be self-isolating for a period of seven days.’

Meanwhile, Sergio Brusin of the European Centre for Disease Prevention and Control, said a lockdown in the UK could also be an option in as little as two weeks if UK officials do not take more drastic action.

Speaking on Victoria Derbyshire, Mr Brusin said: ‘If you don’t do anything then thousands of cases will come. The UK is in the same situation Italy was two weeks ago.’

As of 9am yesterday, 319 people have tested positive for the virus in the UK and five have died in British hospitals. The Department of Health said a total of 24,960 people have been tested.

Currently, there are 9,172 cases of Covid-19 in Italy with 463 deaths, and although the UK is nowhere near those figures yet, experts are concerned they could rise in a similar manner. However, officials have urged that for most people who contract the virus, it will be a mild flu or cold and will fully recover.

He said: ‘Fourteen days ago, Italy had fewer coronavirus cases than we do today. They employed similar public health measures to us. Unless I’m missing something, this is us in a fortnight.’

As of this morning, Italians have been advised to remain at home and movement is severely restricted except for work and emergency reasons. Those who want to travel outside the areas where they live will have to demonstrate a valid reason.

‘There won’t be just a red zone,’ he told reporters, referring to a lockdown of areas in northern Italy instituted over the weekend. ‘There will be Italy’ as a protected area, he said.

Following the news, the Foreign Office urged Britons to reconsider their travel to Italy, saying: ‘British nationals remain able to depart Italy without restriction. Airports remain open throughout Italy. However, airline schedules are subject to change and some flights are being cancelled. Travellers are advised to check flight details with airlines.

‘Additional restrictions include the closure of museums, cultural institutions and the suspension of all public gatherings and sporting events. Religious ceremonies and funerals are suspended. Ski facilities are closed. Childcare facilities, schools and universities are closed until 3 April. Restaurants and bars remain open with restricted hours and reduced seating.’

Anyone returning from Italy to the UK will be asked to self-isolate for 14 days.