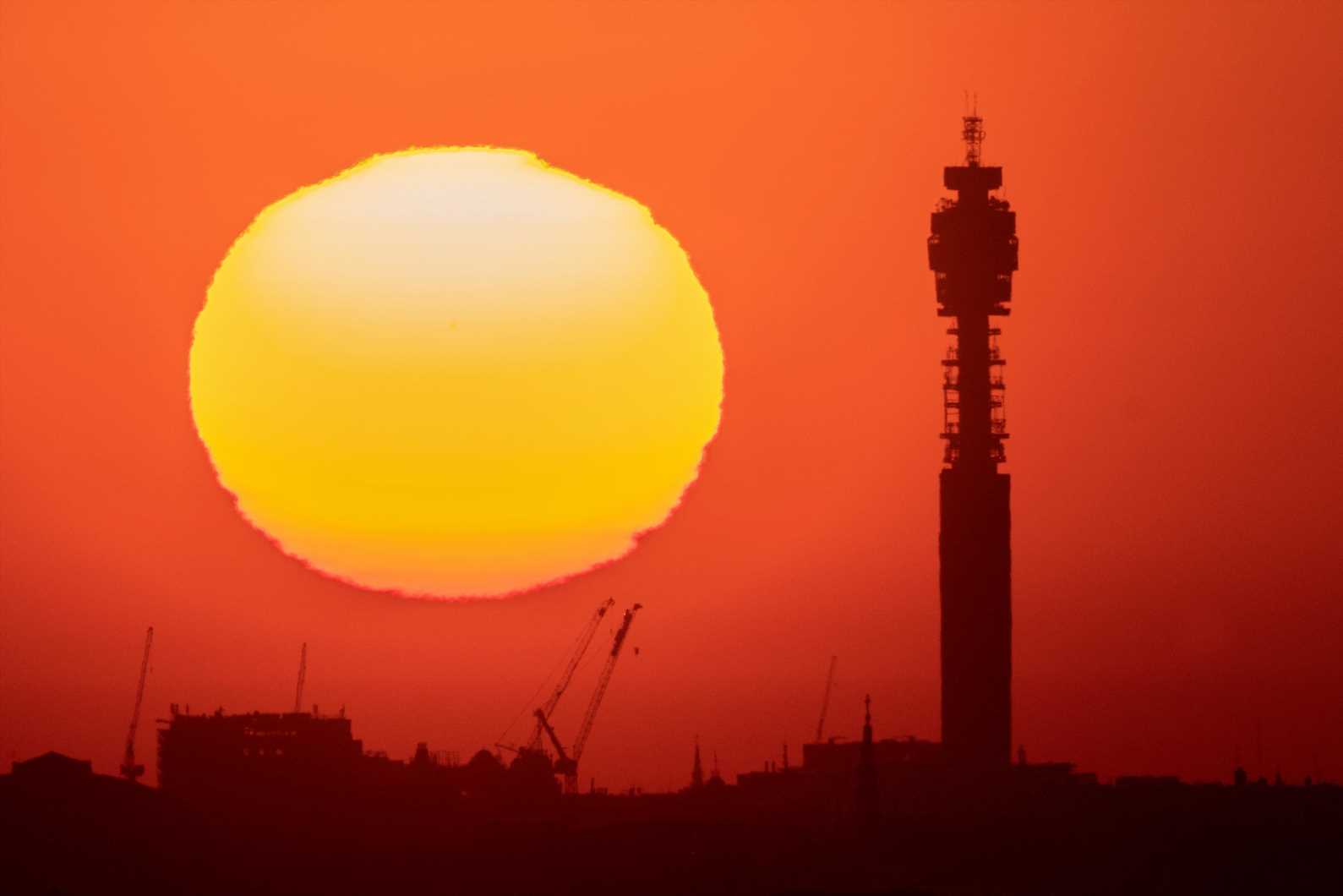 BRITS are set to sizzle in 29C heat as the UK is hotter than Australia today – and the scorching weather isn't going anywhere anytime soon.

The heatwave is said to be sticking around for another two weeks as the country is warmer than ten countries on the Government's green list. 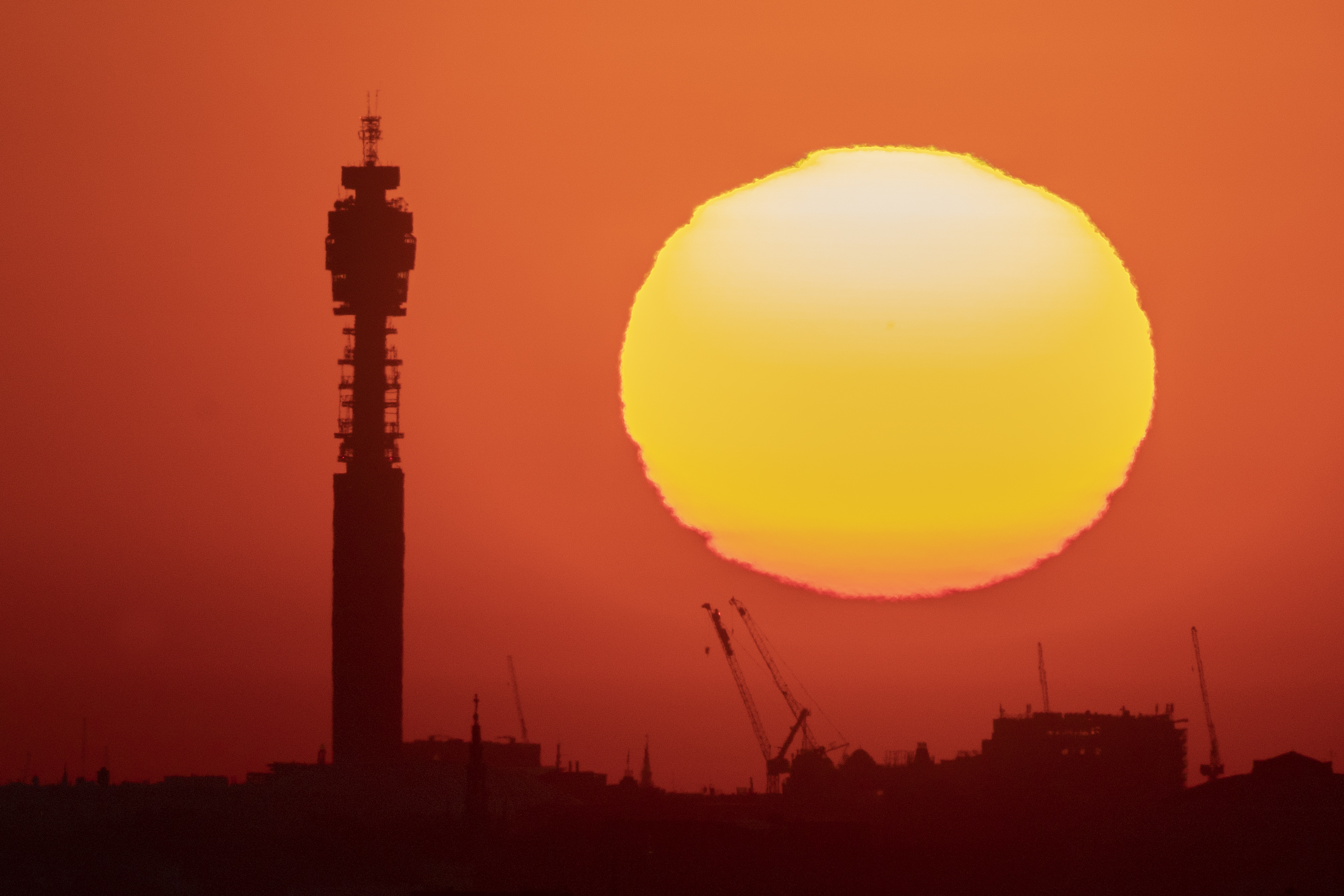 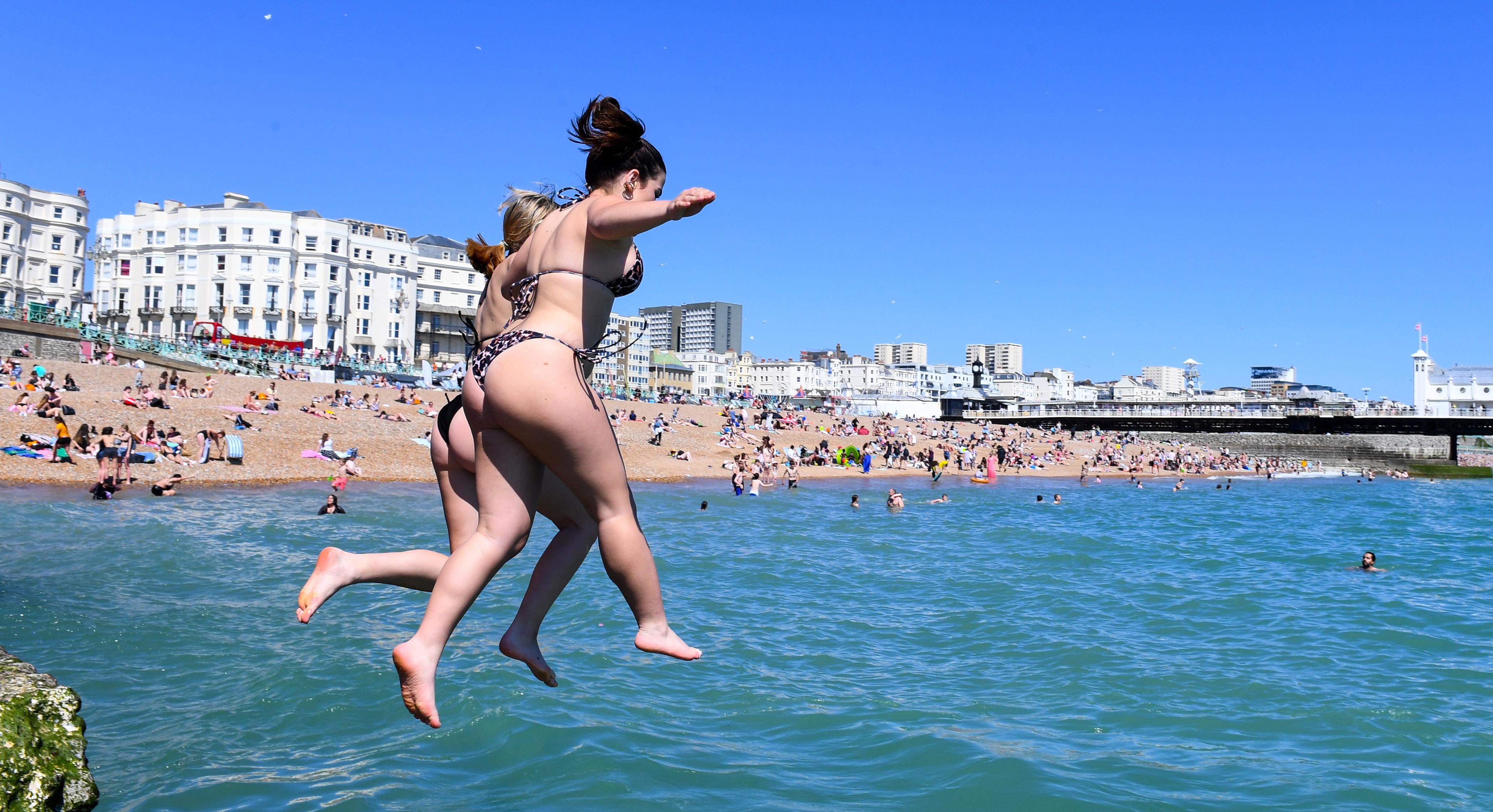 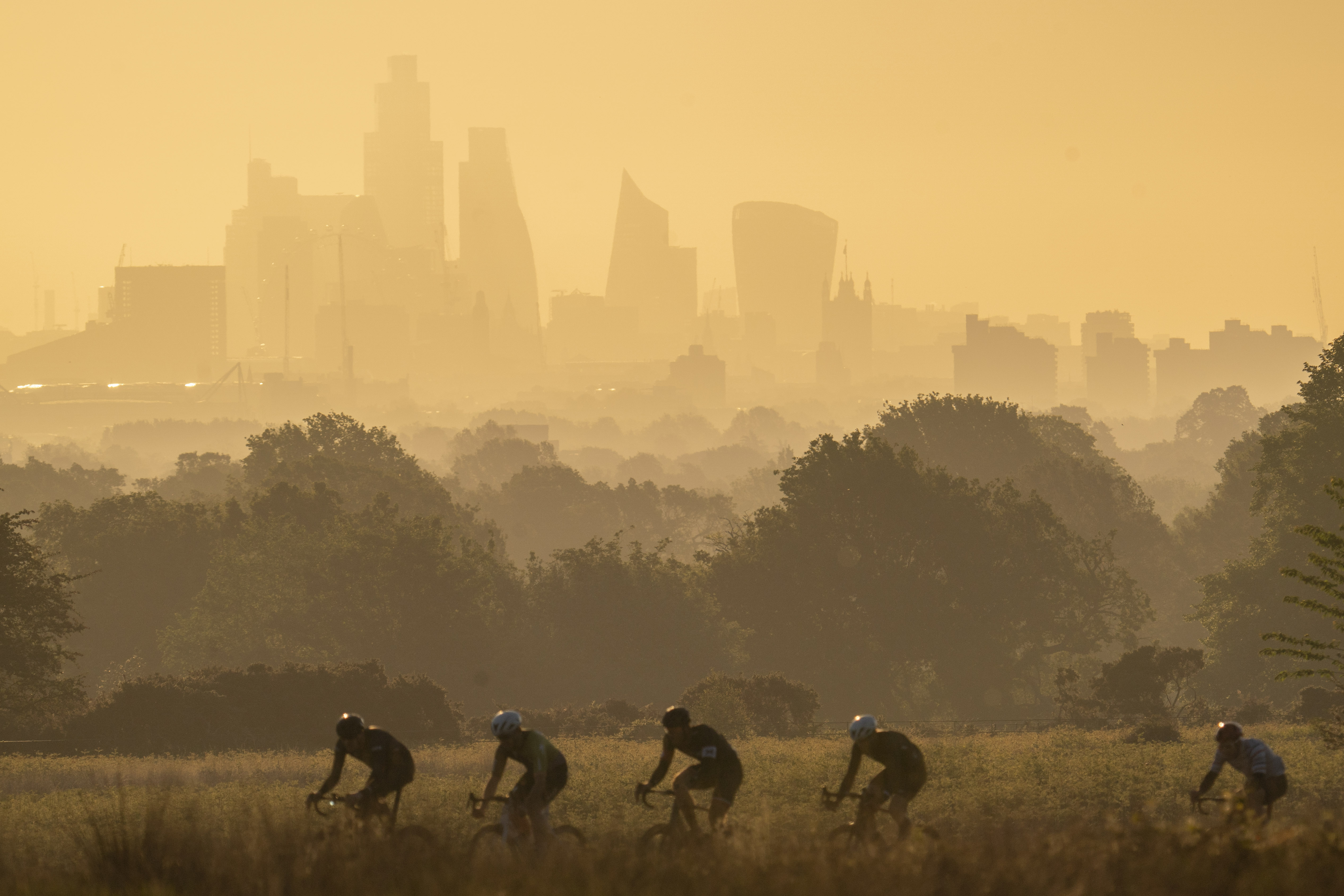 Our cousins on the other side of the world are seeing highs of 17C today in Canberra, although it is technically winter for Australians.

Other green list spots include Portugal (20C in Lisbon), Gibraltar (25C) and Israel (25C in Jerusalem).

St Helena (21C in Jamestown), the Faroe Islands (10C) and Falkland Islands (3C) – are all chillier than the British Isles today.

Countries on the green list are the destinations that holidaymakers can enjoy time away without needing to quarantine upon their return.

There are 12 countries on the list, which have a low rate of infections and a steady number of vaccinations being distributed.

The warmth has sparked heavy thunder in South Wales and South West England this morning.

The Met Office has issued a yellow weather alert from 5am to 11am as it warns of power cuts and train delays and dangerous road conditions are possible. 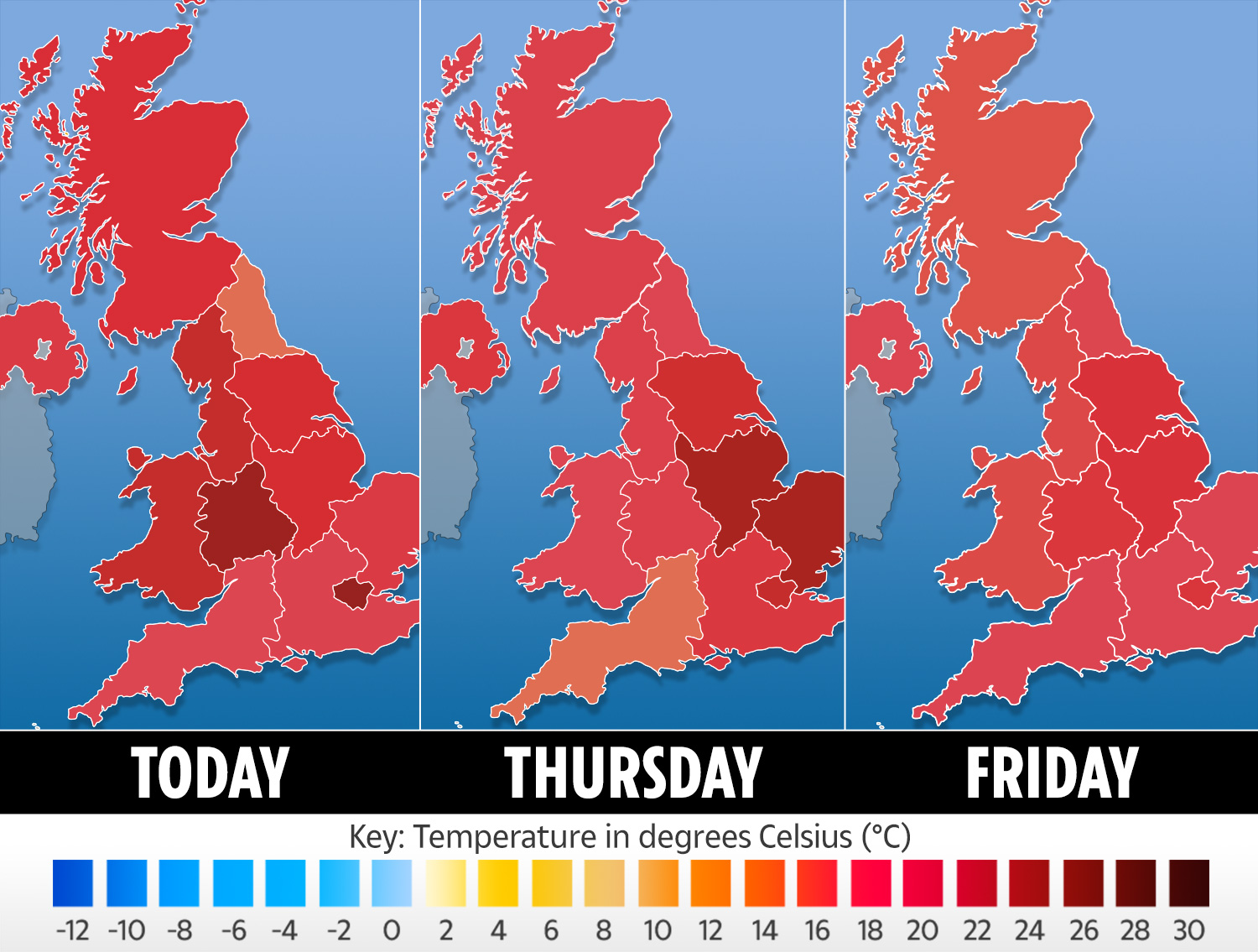 Met Office meteorologist Alex Burkill said: "The thunderstorms could bring lots of lightning, some hail, as well as some heavy rain, and with the half term there is an increased number of tourists in this area.

"The thunderstorms do then push north-eastwards into the Midlands and across more of Wales, but they also ease and break up, so these places will see some showers but they won't be as intense."

But Mr Burkill said that today was likely to be hotter than yesterday with the possibility of a sizzling 28C or 29C in some areas.

The Met Office's yellow thunderstorm alert from 5am to 11am warns there could be some short-term loss of power and other services, while delays to train services and poor road conditions are possible.

After a thoroughly miserable May, summer finally seems to be on the way.

The UK had its fourth highest amount of rainfall on record for the month, with an average of 120mm falling.

Wales had wettest May since records began in 1862, with 245mm of rainfall, while England had its fifth wettest May ever, and its wettest since 1967, with 111mm of rain.

Temperatures have remained balmy yesterday with a high of 25C for London and the South East.

Meanwhile in the North West a top temperature of 24C is predicted.

The bookies have already cut odds to just 7/4 on this going down as the hottest June ever, but with temperatures on the up, it's now just a 5/1 shot they surpass 35.6C before the month is out.

Alex Apati of Ladbrokes said: "We've had to wait a while, but the next few weeks will more than make up for a miserable May, and it's looking increasingly likely we're on course for a scorching June."

THIS IS A DEVELOPING STORY…