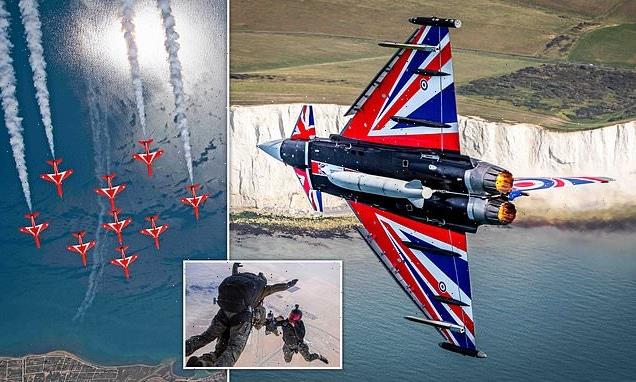 Up, up and away! Stunning photo of Hercules plane climbing vertically into the sky is among the RAF’s most spectacular images of the year

An incredible photo of a Hercules plane climbing vertically into the sky is among the RAF’s most spectacular images of the year, honoring the top photographers in the service.

The RAF Photographic Competition 2021 announced its winners after nearly 1,500 images and more than 50 videos were submitted across the competition.

The competition has sky-rocketed to seven categories, up from last year’s four, including Personnel, Current Equipment, Operations and Exercise and finally, Video. The best nine images chosen by the judges going head-to-head in the Peoples’ Choice category.

The winner of the RAF Association sponsored Personnel category was SAC Craig Williams with ‘Pandemic’. His powerful image of a RAF medic conducting Covid-19 testing in Derbyshire as part of Government efforts to fight the pandemic scooped top spot.

Cpl Matthews captured a mesmerising photo of a C-130J Super Hercules aircraft conducting a ‘nose-up break into the flying circuit’ over the runway at RAF Akrotiri, Cyprus.

Judge Hilary Roberts said: ‘This year’s entries reflect the RAF’s huge contribution to British life as well as its core role of keeping our skies safe.

‘Congratulations to all winners and entrants on an excellent standard of photography in an exceptionally challenging year.’

Co-judge WO2 Jamie Peters added: ‘Picking the top images from the many submitted was a real challenge, the standard of entries were as technically excellent as they were varied, showing the diverse range of tasks the RAF and its photographers do all over the world.

‘From support with the Covid pandemic at home to operations abroad the photographers have captured it all, as a fellow military photographer I looked for images that made me wish I had taken them, there were many that fell into that bracket which made my job all the more difficult. Well done to everyone who entered.’

The winner of the prestigious Current RAF Equipment category was Cpl Lee Matthews – titled ‘Griffin’ – sees an awe-inspiring shot of vertical manoeuver. Cpl Matthews captured a mesmerising photo of a C-130J Super Hercules aircraft conducting a ‘nose-up break into the flying circuit’ over the runway at RAF Akrotiri, Cyprus. It made the move, flying in support of Operation Fortis, after returning from Jordan 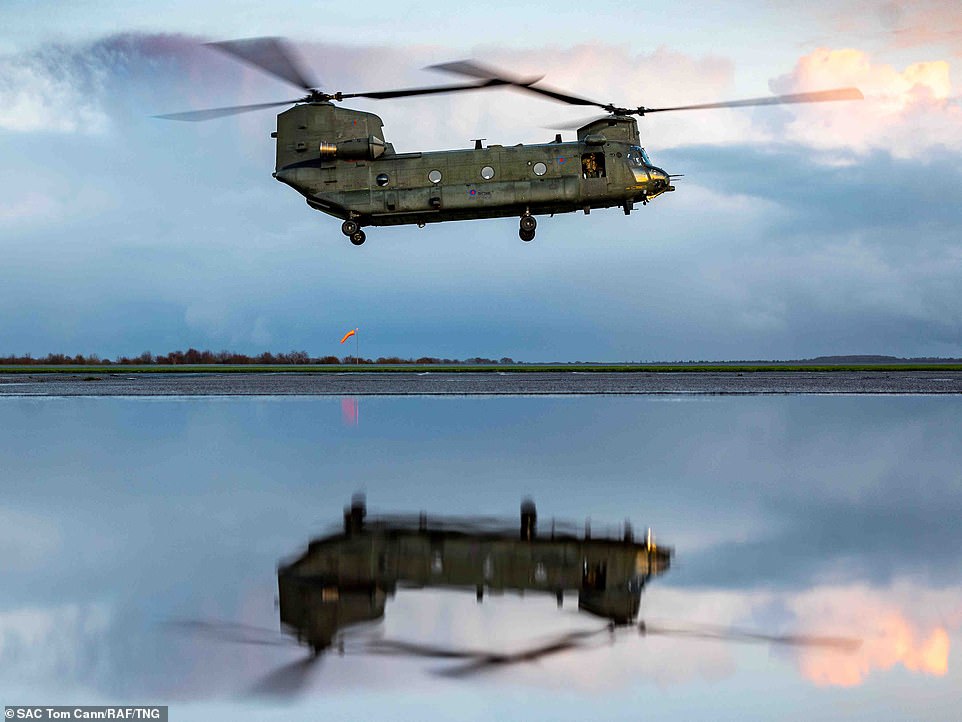 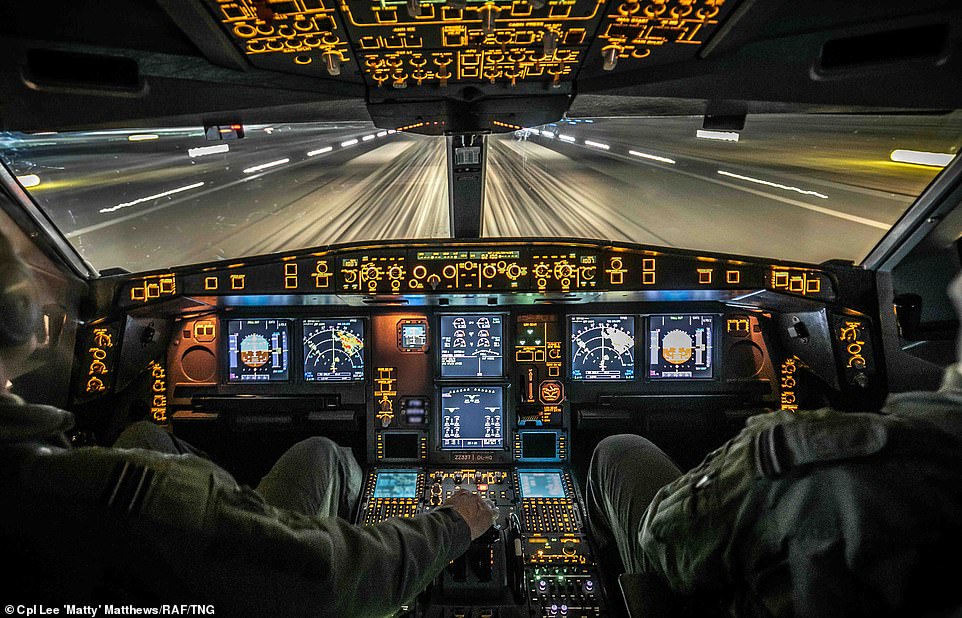 ‘Mind over Matter’ by Cpl Lee ‘Matty’ Matthews. The photo shows a refuelling sortie supporting Operation SHADER conducted at night from a Royal Air Force Voyager, refuelling a pair of RAF Typhoons over the Middle East. The wave included two Royal Air Force Typhoons, followed by an Airbus Defence Voyager which provided the Typhoons with fuel throughout their missions. The aircraft operated all day and night throughout the year in support of Op Shader as the UK and allied nations fought to defeat ISIS 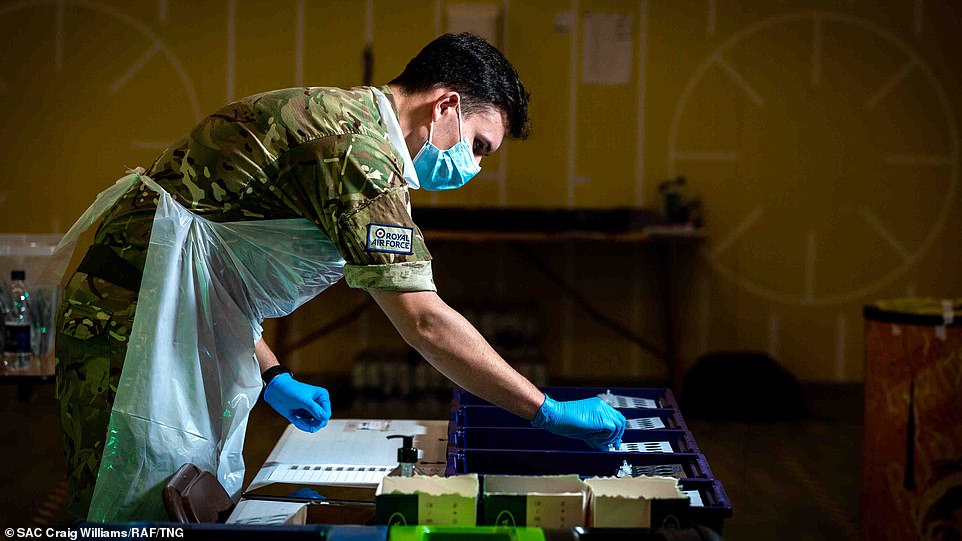 The winner of the RAF Association sponsored Personnel category was SAC Craig Williams with ‘Pandemic’. His powerful image of a RAF medic conducting Covid-19 testing in Derbyshire as part of Government efforts to fight the pandemic scooped top spot. Some 130 personnel from across the RAF have been conducting community COVID testing in South Derbyshire 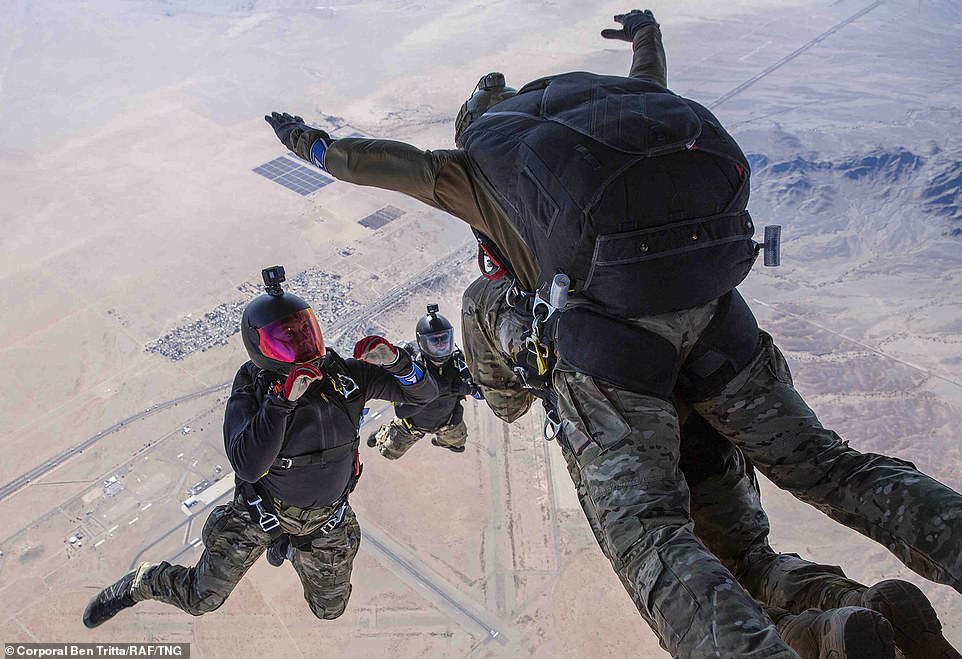 ‘Follow Me’ by Corporal Ben Tritta, which was the runner-up in the Personnel category at the 2021 Royal Air Force Photographic Competition. Cpl Ben Tritta picked up his gong for this mind-blowing photo of parachute instructors exiting an aircraft over California, USA. 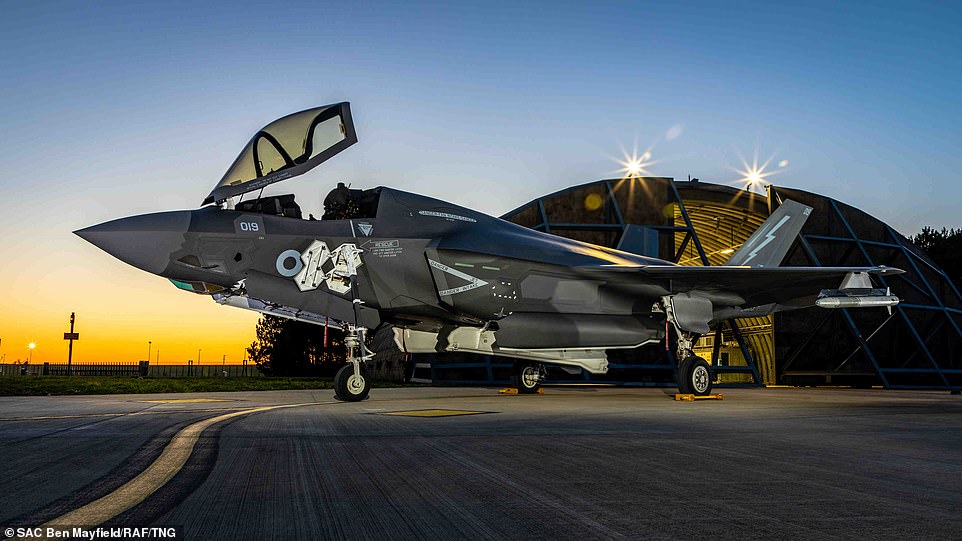 Image of an RAF F-35B Lightning, BK19, at 617 Squadron during sunset. RAF Marham is the home of the F-35B Lightning, a 5th Generation, multi-role, stealth fighter. The photo was runner-up in the Current RAF Equipment category of the 2021 Royal Air Force Photographic Competition 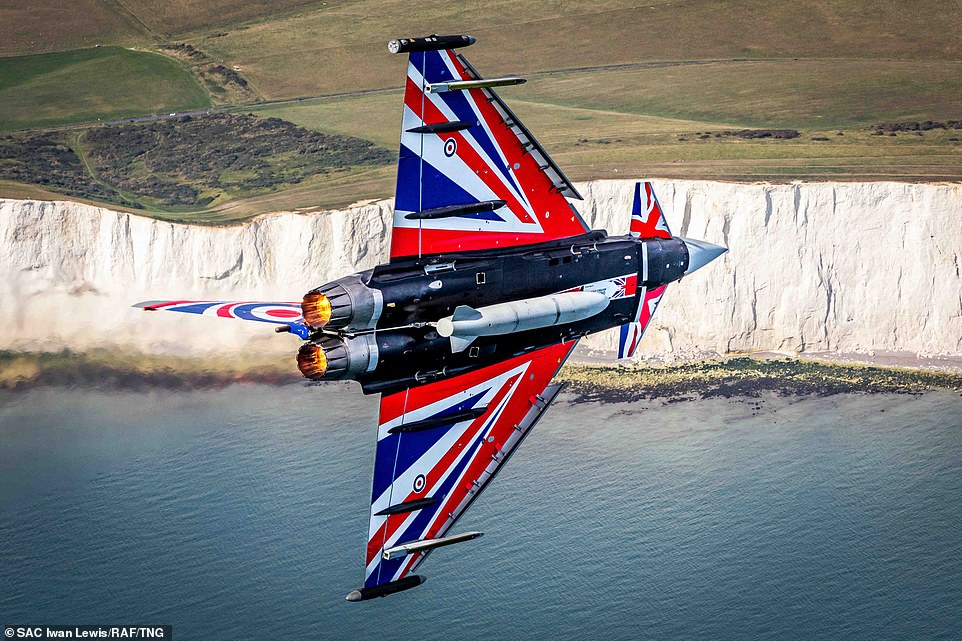 The RAF Typhoon Display Team aircraft, BLACKJACK, piloted by Flt Lt Sainty flying over the iconic White Cliffs of southern British coastline ahead of the anniversary of the Battle of Britain. It was entered in the People’s Choice category of this year’s awards 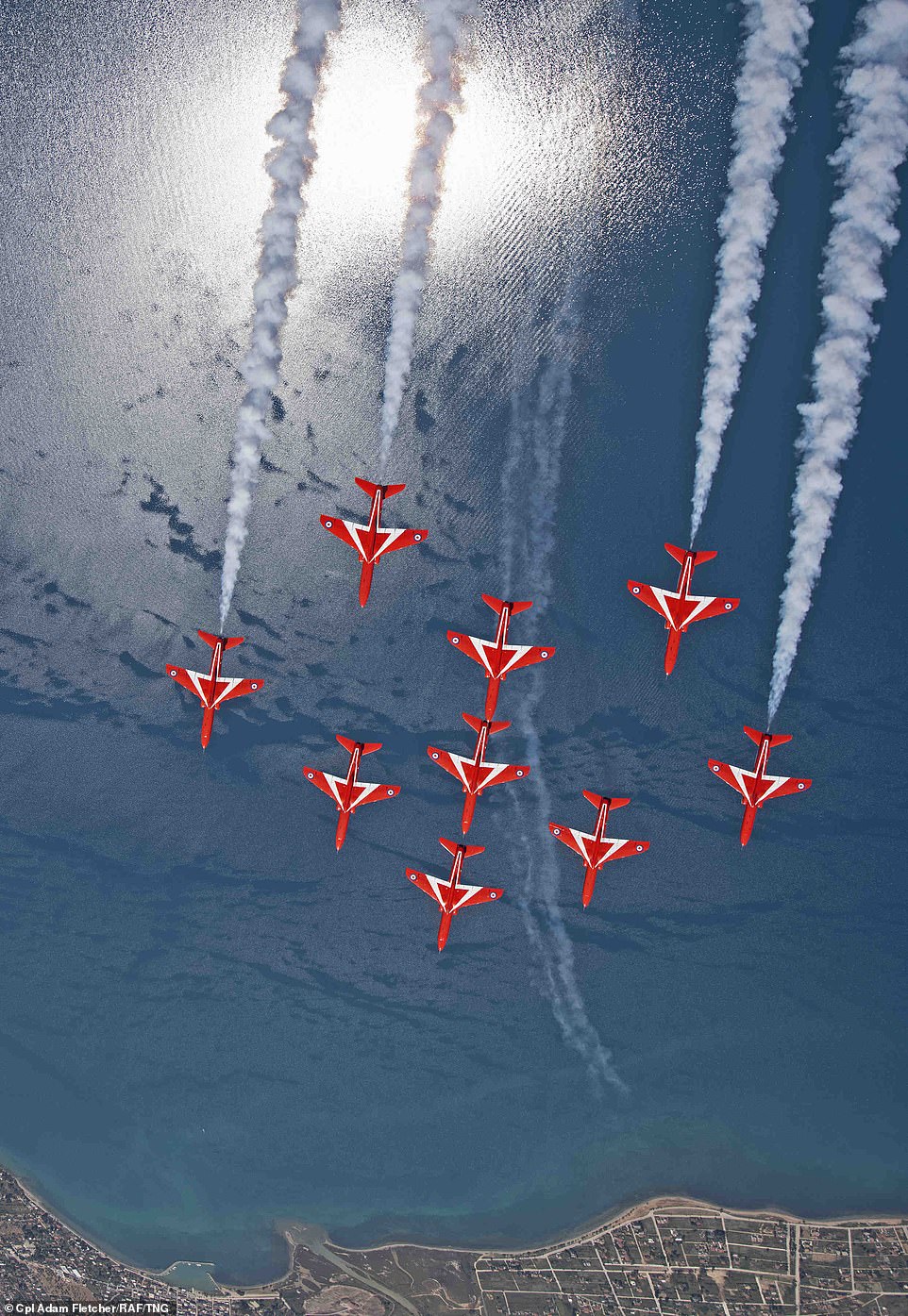 Red Arrows chase over the Negroponte Datum in Greece. Seen here while in Feathered Arrow formation at the top of a loop. The photo was highly commended in category E, current RAF equipment at the 2021 Royal Air Force Photographic Competition 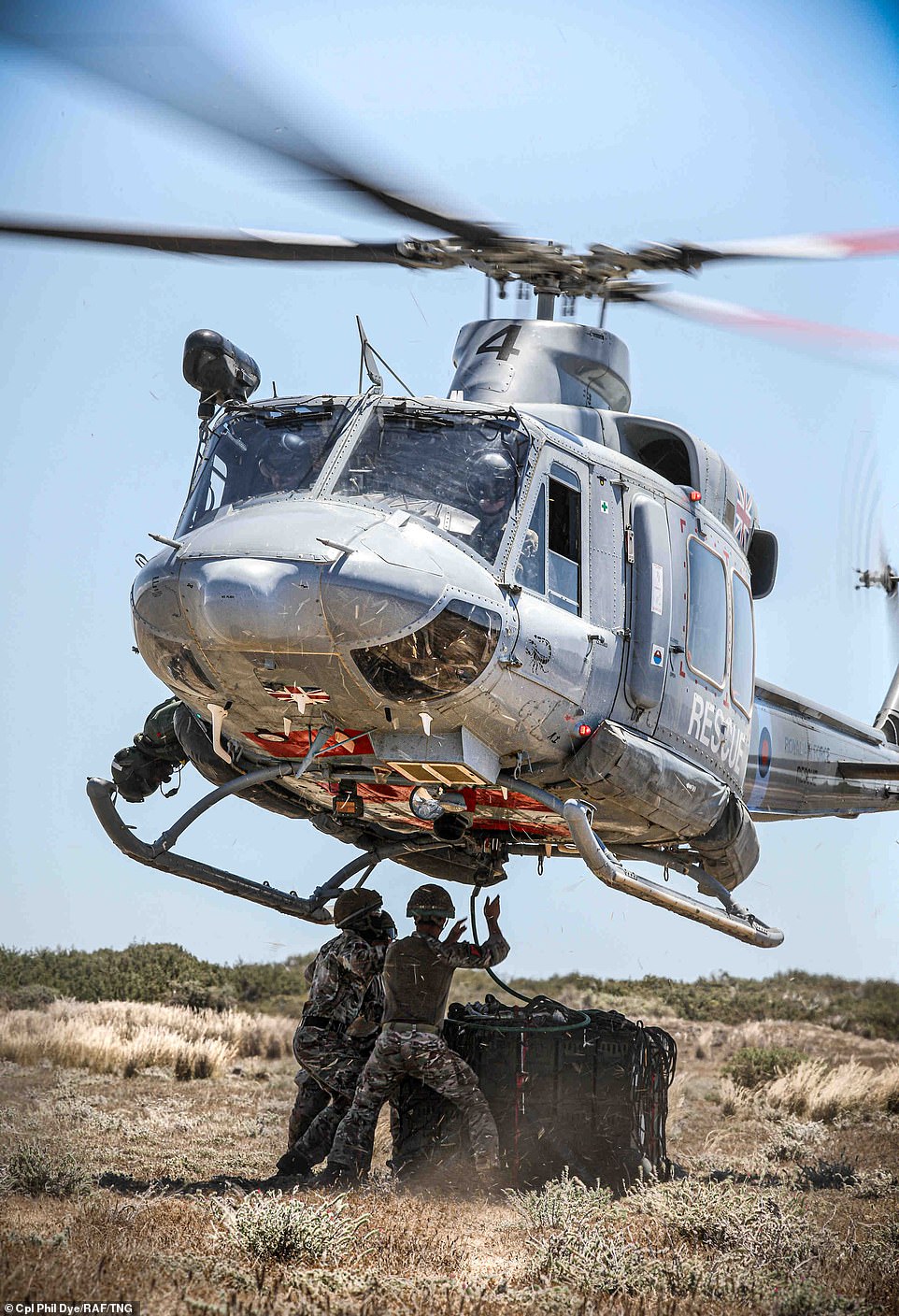 British Army soldiers from 13 Air Assault Support Regiment work closely with Royal Air Force’s 84 Squdron, Search and Rescue during an exercise at RAF Akrotiri, Cyprus. The exercise involved several heavy loads, such as supplies, a quadbike and a trailer being underlung to the Bell HAR2 Griffin Helicopter. The exercise was part of Op FORTIS 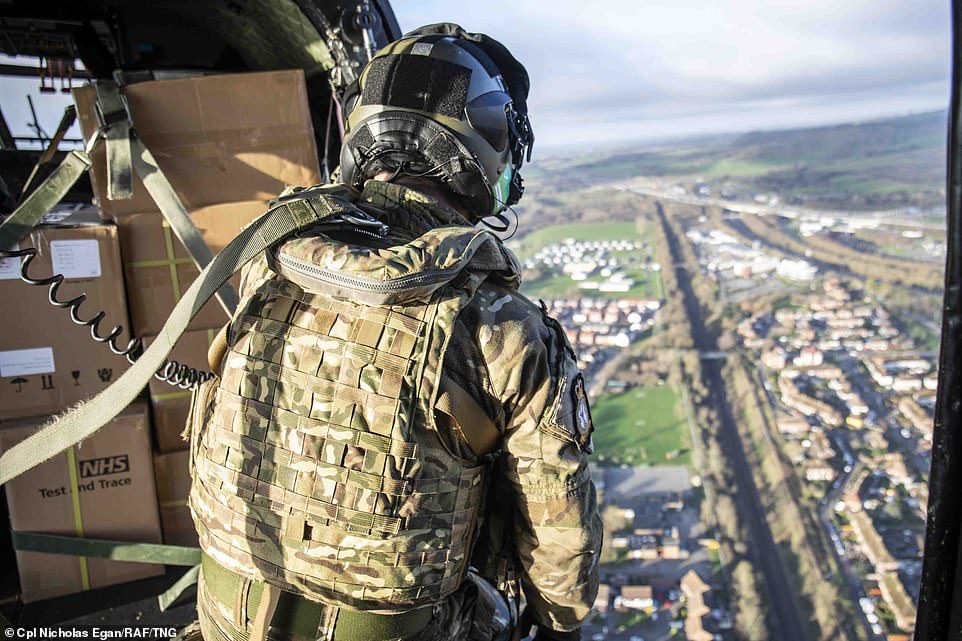 A Royal Air Force Puma delivers Covid tests to the Folkestone area of Kent for British Soldiers to provide testing to awaiting European lorry drivers. British Army soldiers supported civilian agencies in their response to pandemic-related congestion in Kent, where European lorry drivers were left stricken while waiting for Covid tests allowing them to return to mainland Europe 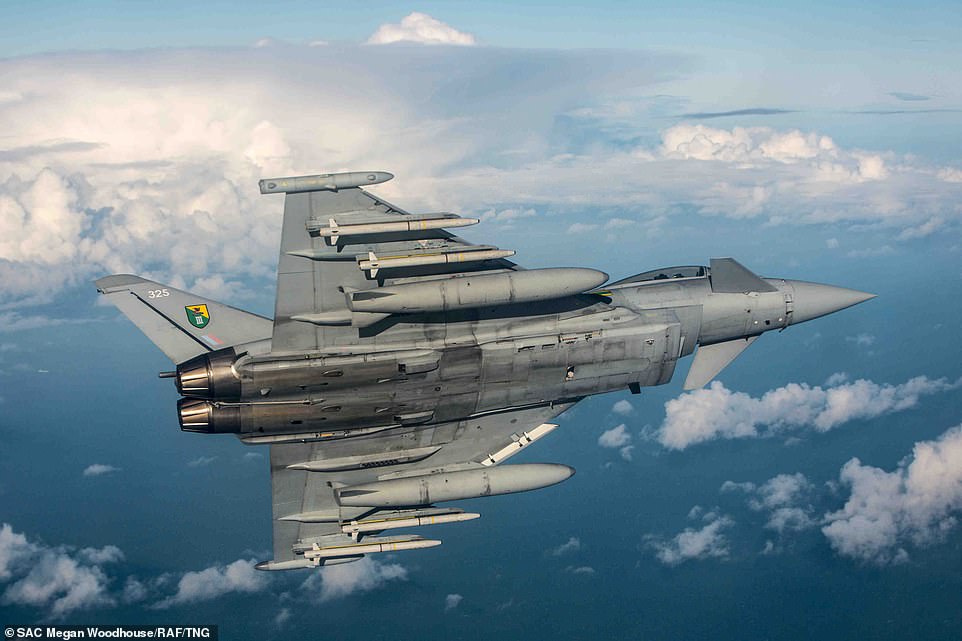 An image of a UK Typhoon conducting a sortie which involved flying alongside the French Armee De L’Air and Space as they conducted a joint intercept of long Range Aviation, scrambling both countries’ Quick Reaction Alerts. Typhoons from RAF Coningsby met with Armee De L’Air Rafale and mirage 2000 to meet a simulated non-NATO military aircraft entering the UK Airspace. They were supported by RAF Voyager from RAF Brize Norton providing air-to-air refuelling 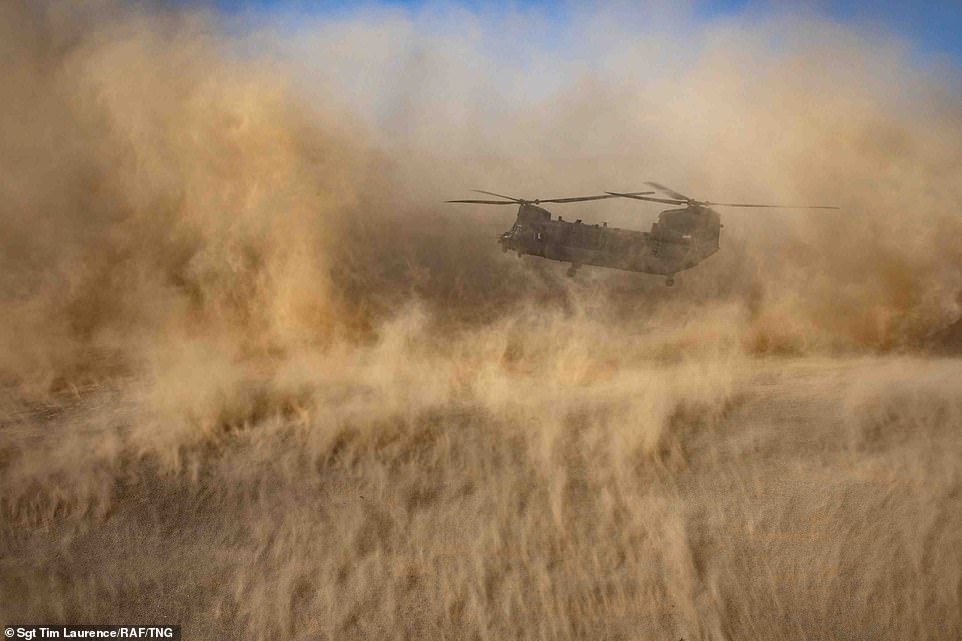 Pictured is an RAF chinook conducting dust landings training while part of Exercise NOCTEM WARRIOR 2021. RAF Odiham personnel and chinook aircraft have been operated out of Naval Air Facility El Centro, California during of the exercise. The terrain and climate are typical of overseas operations and therefore provide realistic scenarios for training 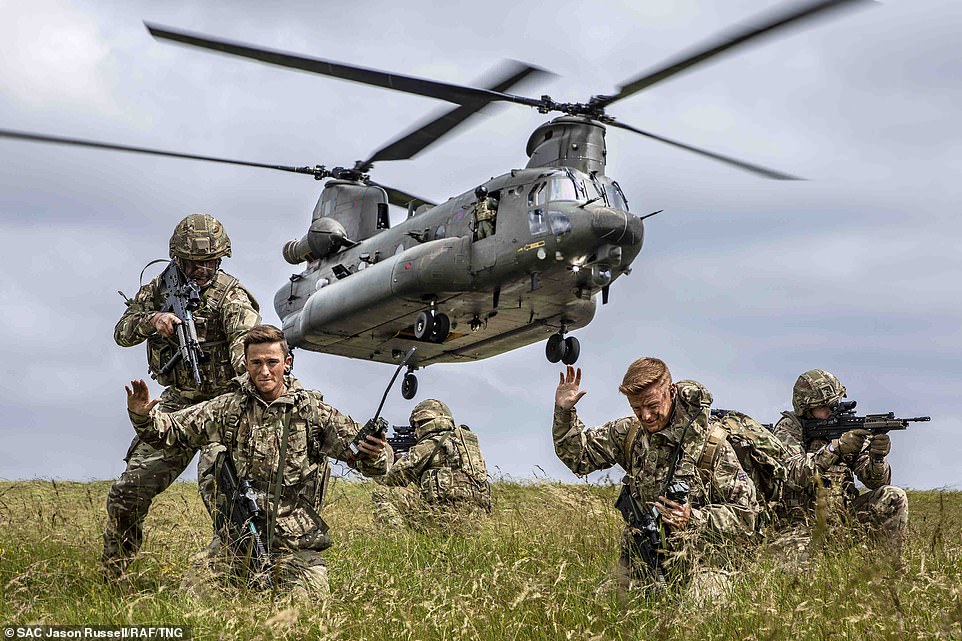 Image shows RAF Regiment and RAF Chinook Force working together to demonstrate a Joint Personnel Recovery exercise (JPR). RAF Regiment located the recovery personnel and provided an all round defence until air support arrived in the form of an RAF Chinook from 18(B) Squadron at RAF Odiham 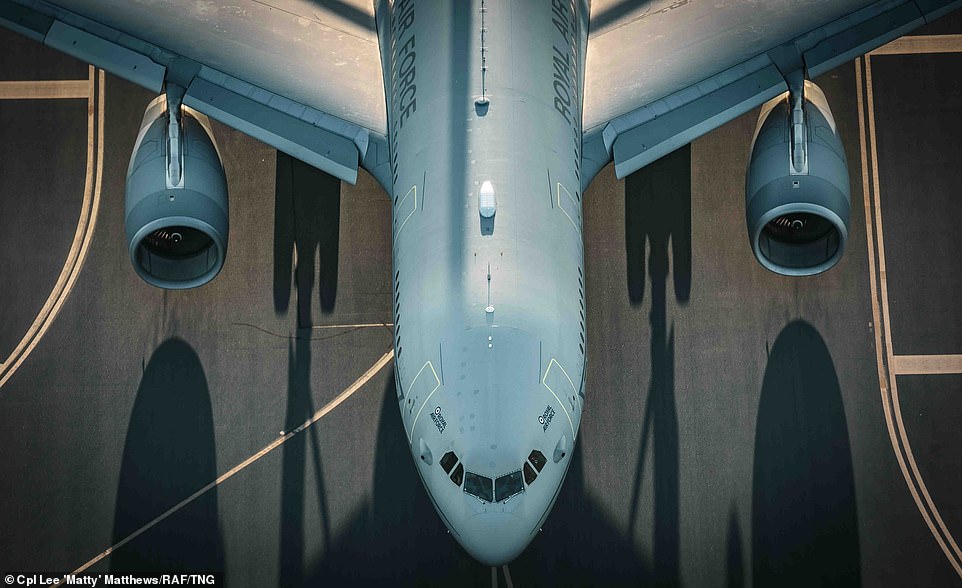 Aerial imagery captured of the Operation SHADER wave from an 84 Squadron Griffin Helicopter. This including flying over a taxing Voyager along with two Typhoons and a Hercules departing the runway of RAF Akrotiri. The snap won first place in the Portfolio section of the competition 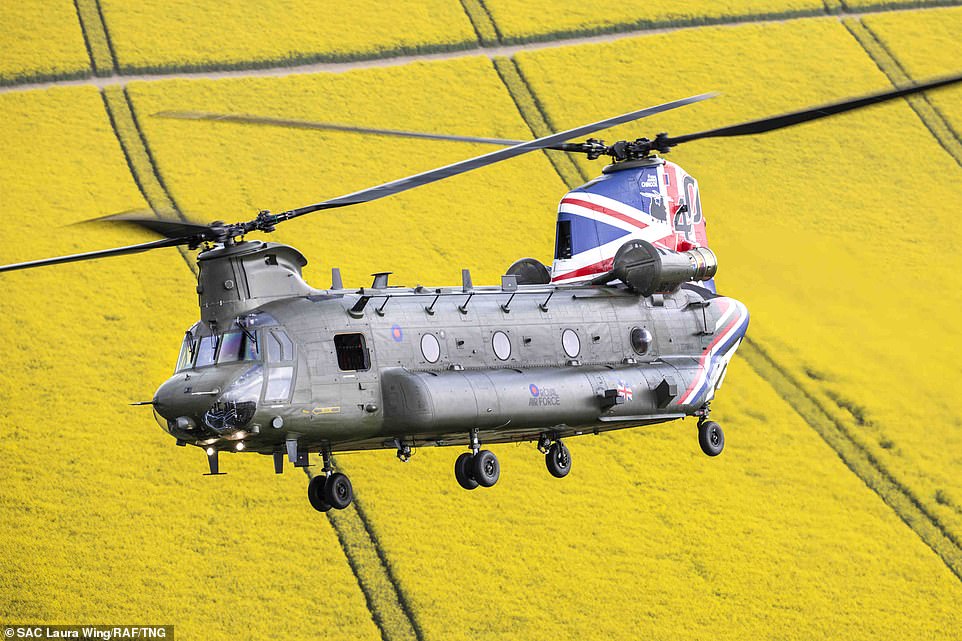 Royal Air Force Odiham celebrating the 40th anniversary of the Chinook helicopter entering RAF service with a commemorative new colour scheme. The tail art was unveiled earlier this year as the aircraft departed RAF Odiham on a routine training sortie 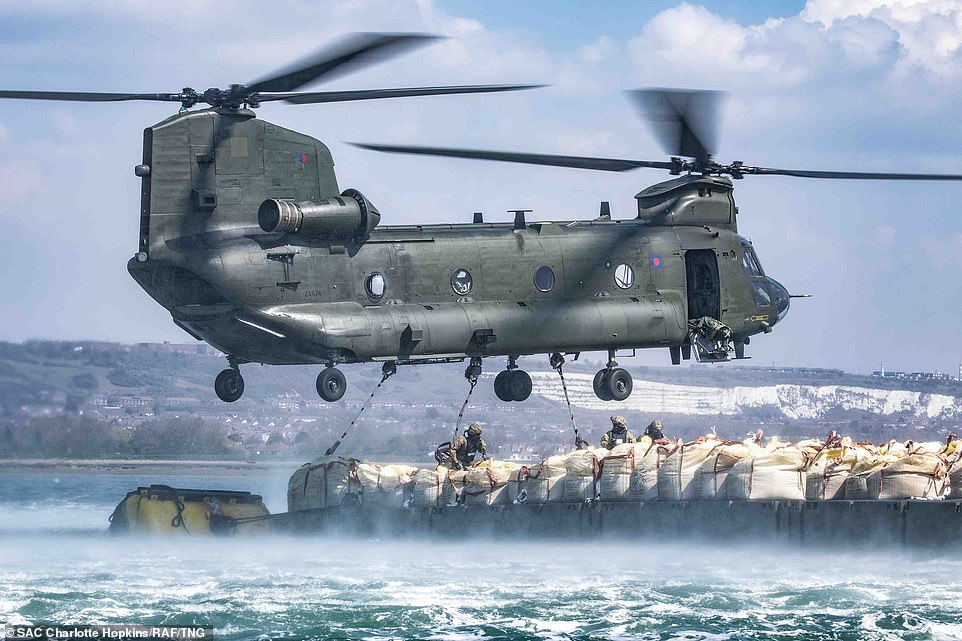 Royal Air Force Chinooks from 28 Sqn RAF Benson deliver aggregate onto Pewit Island in the Portmouth Harbour. Pewit Island currently has no birdlife and it was hoped aggregate would make it more attractive to nesting birds. Due to shallow water and amount of aggregate required, air delivery by helicopter is the only viable method 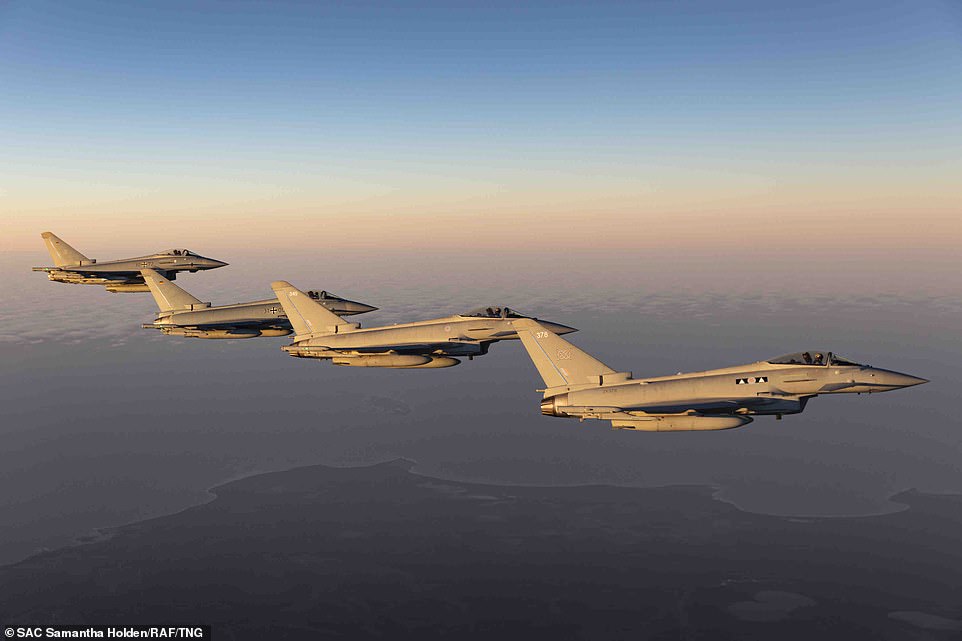 Image of Royal Air force Typhoons from RAF Lossiemouth flying alongside their counterparts from the German Air Force over Eastern Europe. The photo was highly commended in the Portfolio category of the 2021 Royal Air Force Photographic Competition 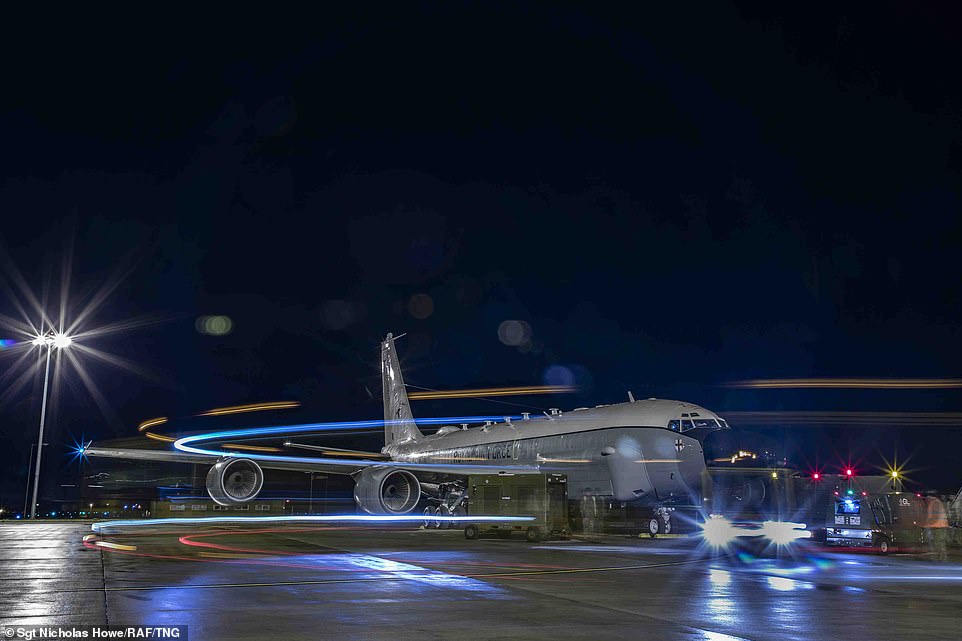 Blinding Lights’ by Sgt Nicholas Howe. Image shows an RC-135W Rivet Joint aircraft from 51 Squadron, at RAF Waddington before it takes off for its Joint Exercise with NATO Allies. It was entered in the Peoples’ Choice category at the 2021 Royal Air Force Photographic Competition