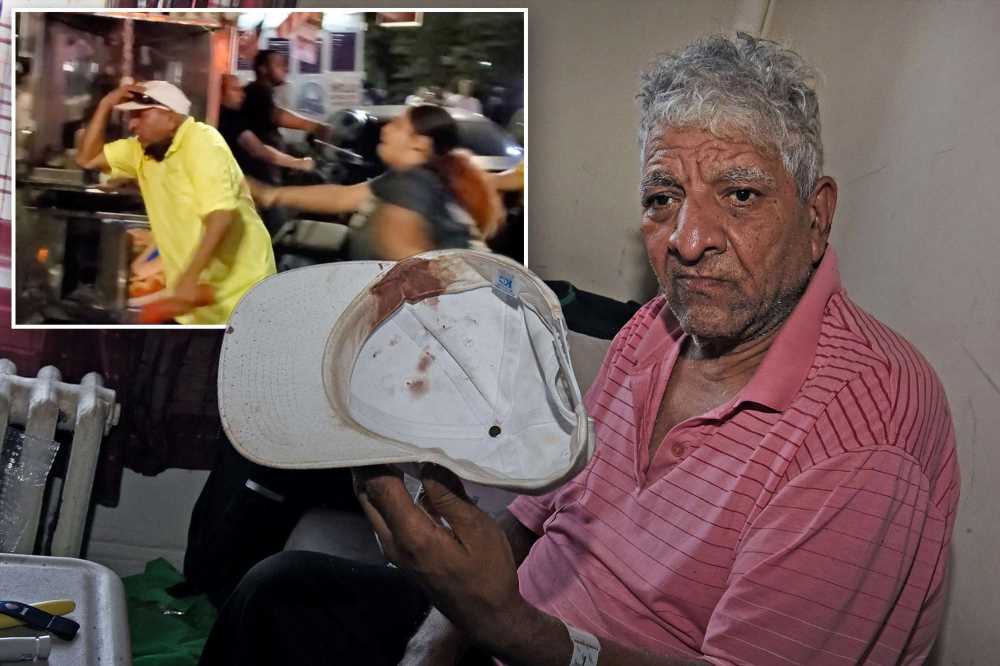 ‘Everyone is living it up’: Party animals go all out in Washington Square park

The hot dog vendor caught on camera getting pummeled by punks outside Washington Square Park thought he was going to “bleed to death” that night — and vowed Tuesday to “never go back” to the problem-plagued park.

Nader Hassaneen, 65, an Egyptian immigrant and retired street vendor, was on hand Sunday night to help son’s pal with his food cart when the unruly mob descended on him — beating him up and tossing hot sauce in his eyes.

“My eyes were burning,” Hassaneen told The Post in Arabic, while his daughter translated. “A lot of people were hurting me and pushing me around. They punched in the back of the head.  I didn’t know I was bleeding.”

He said the melee began when a woman yanked an American flag off the cart, demanding it be replaced with a Pride flag instead — an encounter previously described to The Post by vendor Abdo Mansour.

“I was videotaping it and telling her she shouldn’t do that,” Hassaneen said from his home in Brooklyn. “My friend asked her, ‘Why did you do that?’”

That was when one of the assailants threw the hot sauce and all hell broke loose, recalled Hassaneen, who stopped working as a full-time street vendor because of a heart condition.

“I have a broken nose. They say I might need surgery,” he said. “When I saw the blood in my cap and I was bleeding from my nose, I thought I was going to bleed to death.”

He added, “I’m never going back there.”

Video of the beatdown just before 11 p.m. at Fifth Avenue and Washington Square North shows the vendors frantically trying to calm the revelers, some dressed in rainbow outfits for Pride celebrations earlier in the day. Hassaneen is then slugged by a woman and falls to the ground, which is when police arrive.

“I felt safe because the cops were around. There were about 30 or 40 cops near the arch,” Hassaneen said Tuesday, “but I was scared when they came at me. There were a lot of people coming at me at the same time.”

Police said the brawl broke out over prices of items — but a videographer who captured the beatdown claimed it was sparked by one of the cart workers hurling an anti-gay slur.

“I would never do that. I don’t have a problem with them,” Hassaneen said. “I know it was their parade. It was their day. They came out to have fun and enjoy themselves.”

Hassaneen and Abdelalim Abdelbaky, 28, who operates the cart, said it was not the first attack on him or his employees in a park plagued by recent violence and illegal drug use.

“Most of the people in the park are good, but you have some bad ones and they are giving the park a bad name,” Abdelbaky said. “They should keep them out of the park … I don’t take my kids to the park, I don’t want them to see something bad.”

Hassaneen’s 24-year-old daughter Soha Ahmed said her dad seemed relatively unscathed when they met him at the hospital. But then she saw the video.

“That’s when I realized how bad it was. It’s just not right,” she said. “They are out there for love and then then it gets chaotic and violent.”

No arrests have been made in the assault.