Colorado Springs: Richard Fierro said he was at a table in Club Q with his wife, daughter and friends on Saturday, watching a drag show, when the sudden flash of gunfire ripped across the nightclub.

His instincts from four combat deployments as a US Army officer in Iraq and Afghanistan instantly kicked in. Fight back, he told himself. 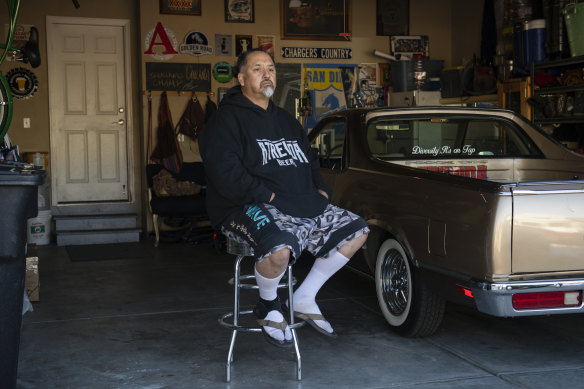 Richard Fierro at his home in Colorado Springs. Fierro, served as an Army officer in Iraq and Afghanistan. He moved through the chaos of the shooting this weekend, tackling the gunman and beating him bloody with his own gun. Credit:Daniel Brenner/The New York Times

In an interview at his house, where his wife and daughter were still recovering from injuries, Fierro, 45, who left the Army in 2013 as a major, according to military records, described charging through the chaos at the club, tackling the gunman and beating him bloody with the gunman’s own gun.

“I don’t know exactly what I did, I just went into combat mode,” Fierro said, shaking his head. “I just know I have to kill this guy before he kills us.”

Authorities are holding Anderson Lee Aldrich, 22, on charges of killing five people, and say 18 more people were injured in a rampage at the club that lasted only a few minutes. The death toll could have been much higher, officials said, if patrons of the bar had not stopped the gunman.

Fierro’s description of what happened in those moments in the club closely matches accounts given by police and city officials and by the club’s owners, who have reviewed security footage from the massacre. When they were shown a picture of Fierro, one club owner, Nic Grzecka, said he looked like the man who took down the gunman.

“I don’t even know his name,” Grzecka said. “I would really like to meet him.”

When the shooting started, Fierro said, he hit the floor, pulling a friend down with him. As bullets sprayed, he saw the gunman move through the bar towards a door leading to a patio where dozens of bar patrons had fled. Fierro, who served in the Army for 15 years, said he raced across the room, grabbed the gunman by a handle on the back of his body armour, pulled him to the floor and jumped on top of him.

“Was he shooting at the time? Was he about to shoot? I don’t know,” Fierro said. “I just knew I had to take him down.”

The gunman, who Fierro estimated weighed more than 130 kilos, sprawled onto the floor, his military-style rifle landing just out of reach. Fierro started to go for the rifle, but then saw that the gunman had a pistol as well.

“I grabbed the gun out of his hand and just started hitting him in the head, over and over,” Fierro said.

As the fight continued, he said, he yelled for other club patrons to help him. A man grabbed the rifle and moved it away to safety. A drag dancer stomped on the gunman with her high heels. The whole time, Fierro said, he kept pummelling the shooter’s head while the two men screamed obscenities at each other.

When police arrived a few minutes later, the gunman was no longer struggling, Fierro said, and he feared that he had killed him. The suspect in the shooting was taken into custody and remained hospitalised on Tuesday (AEDT).

Fierro said he was covered in blood when the police arrived, and officers tackled him and put him in handcuffs. He said he was held in a police car for more than an hour, and screamed and pleaded to be let go so that he could see what had happened to his family.

Fierro, who owns a local brewery, said that on combat deployments in the Army, he had been shot at and had seen roadside bombs shred trucks in his platoon. His record shows that he was awarded the Bronze Star twice. The experiences of combat still haunt him, he said, and the psychological and physical toll of the deployments were why he left the Army.

He said he never thought he would have to deal with that kind of violence at home.