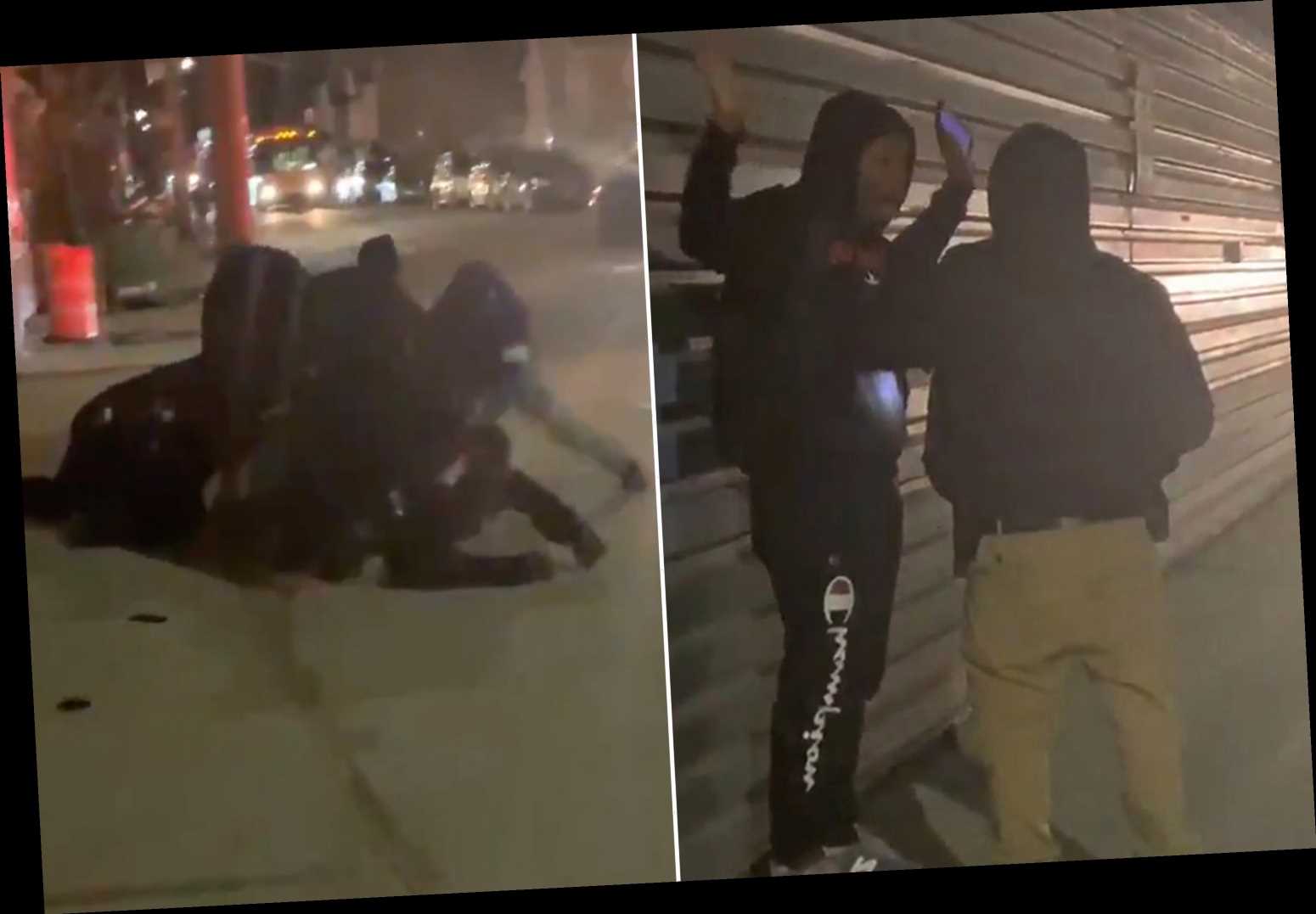 Dramatic mobile phone video shows at least a half-dozen Brooklyn cops pounce on an otherwise calm man Wednesday night in what started out as a minor marijuana bust.

Footage of the incident, which took place about 10 p.m. outside a Canarsie playground, was posted on Twitter Thursday by a passerby — and retweeted more than 75,000 times by midday.

“I’m walking home from work and this undercover cop was holding this man,” eyewitness and Twitter user @TheVelvetRope_wrote. “The guy asked for the cop to identify himself, he ignore that. He asked what crime he commit, he ignore that too. I pulled out my phone.”

The man — wearing sweatpants, a black hoodie, and grey sneakers, is seen on the video holding his hands up with his phone in his right hand — repeatedly asking the plainclothes cop what he did wrong.

“Don’t move,” the plainclothes officer replies. “Why would I want to hurt you?”

The officer speaks over his radio as the exchange continues.

“You’d like to shoot me?” the man asks at one point as the cop appears to point a Taser at him. “I don’t have a crime. Listen to me, what crime did I commit? You’re not supposed to do that. That’s the law.”

“Stop moving!” the officer shouts back.

Suddenly, at least six police officers converge on the scene and pounce on the man, who can be heard saying “I did not commit a crime” eight more times before he’s taken down.

“Help me. Oh my God,” he then screams. “I am not resisting. I’ve never been arrested a day in my life.”

The man later calls out for his mother and can be heard sobbing as the officers eventually handcuff him and pick him up.

Bystanders can be heard questioning the officers’ actions.

“This s–t is completely unnecessary,” @TheVelvetRope said on Twitter. “Yes the guy was in the park but he has a right to be in there because it closes at 9pm. This happened in Canarsie, Brooklyn.”

Police Commissioner Dermot Shea said Thursday he would “look for an investigation just to make sure I know everything that happened.”

Police said plainclothes cops saw the man and another suspect smoking marijuana in a playground on Glenwood Road East 100th Street. The two ran off but were caught.

Shea noted the officers were on alert because of a recent report of a shooting nearby.

“At this point in time, I have nothing to indicate that they were in any way tied to the ShotSpotter incident,” Shea said of the arrested man and his friend. “I certainly don’t know that the officers didn’t know that as they were arriving on that scene. And when you have two people take off running: I’ve been in that situation myself and you don’t know what you have.”

“We’ll have to take a look at the entirety of it,” the commissioner said. “The end is what concerns me. I’d love to have a different outcome.”

Shea said the man, whose name was not released by police, was charged with possession of marijuana, resisting arrest, and obstruction. His companion was issued a citation for smoking marijuana.