London: In the long annals of British legal history, few whodunnits have been quite so eagerly anticipated.

Two and a half years in the making, the ‘Wagatha Christie’ libel case finally got underway at the High Court and, for fans of a good thriller, it did not disappoint.

The cast of characters in court included Rebekah Vardy – wife of the Leicester City and England striker Jamie Vardy – and Coleen Rooney with her husband, Wayne Rooney, the current manager of Derby County FC and England’s record goal-scorer. 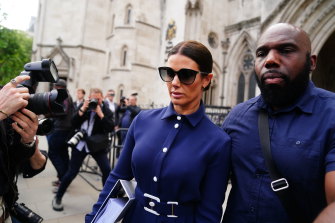 The issue at hand was whether Coleen Rooney, who is being sued by Rebekah Vardy, was guilty of defaming her fellow “Wag” with an accusation that she fed stories about the Rooneys to a tabloid newspaper.

The court was told that the libel battle is “a detective story” that is “essentially about betrayal”. The detective in the case is Rooney herself, who claimed to have used the social media site Instagram to smoke out the source of stories about herself and her family that appeared in The Sun newspaper.

She is defending herself on the basis that her claims that Vardy was the leaker are “substantially true”.

The stories at the heart of the case are that the Rooneys travelled to Mexico for gender selection treatment, that Coleen Rooney was in talks to join the TV show Strictly Come Dancing, and that the family’s Cheshire home was flooded in a storm.

The court heard that in October 2019 Coleen Rooney, 36, had carried out a “sting operation” and accused Vardy, 40, of being the source of the leaks.

David Sherborne, Rooney’s barrister, told the court the leaks could only have come from Vardy or her agent Caroline Watt. 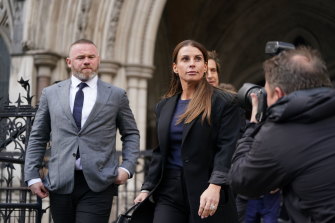 He added: “If [Vardy] gave Ms Watt the gun and the bullets, told her where to target them, told her what was happening and when, that makes her just as responsible as the person who pulled the trigger. To use an analogy, it is like hiring a hitman or woman.”

He said there were text message exchanges between Vardy and Watt discussing the leaking other people’s private information.

Vardy, who arrived at court with a bodyguard, was called as the first witness in the case and was confronted with a kiss-and-tell story from 2004. In the story, she had told the News of the World about an alleged sexual encounter with the singer Peter Andre, in which she compared his manhood to a “miniature chipolata”.

Sherborne held up a printout of the article, asking Vardy if it was “respectful” of Mr Andre’s “right not to share this information” about their private encounter with the newspaper.

Vardy said it was a situation she was “forced” into by her ex-husband and that she “deeply regrets” giving the interview. The mother-of-five remained defiant on the stand, saying she is “not a leaker” and that she “has nothing to hide”.

She and Rooney, who arrived at court with a protective medical boot on one foot, sat several metres apart in court and avoided eye contact.

At the start of the hearing, Rooney’s legal team told the court there had been “widespread and significant destruction or loss of evidence” by Vardy in the build up to the proceedings, including messages being deleted and phones disappearing.

The court previously heard how Watt’s mobile phone fell from a boat into the North Sea “within days” of a judge ordering that it be handed over, while WhatsApp messages on other devices could not be recovered.

The court heard that technology experts described the events as “somewhat surprising”. 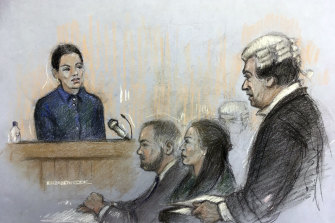 Sherborne accused Vardy of carrying out the “manual deletion” of messages and that the failure to hand over evidence amounted to “the most extraordinary series of disclosure misfortunes”.

In legal documents lodged before the court, lawyers for Rooney said the timing of the phone falling into the North Sea “cannot be coincidental”, adding: “To borrow from Wilde, to lose one significant set of documents may be regarded as a misfortune, to lose two, carelessness, but to lose 10? That must be concealment.”

Hugh Tomlinson QC, for Vardy, rejected the suggestion that evidence had been purposefully withheld, telling the court: “This is untrue. There is no campaign of deletion.”

He added: “The suggestion that there was some sort of conspiracy between Watt and Vardy to destroy evidence is completely baseless.

“It’s a very well known and common feature in everyone’s life that from time to time electronic documents are lost for all kinds of reasons.”

Vardy’s legal team said Rooney had “revelled in” being nicknamed Wagatha Christie and shared posts of herself mocked up as her namesake, crime writer Agatha Christie.

The court heard that “on some occasions” Vardy authorised information to be passed to the press by her agent Watt.

“A short sentence but an incredibly important one,” Sherborne told the court. “Because we now have an admission that Mrs Vardy authorised Ms Watt to secretly pass on information to The Sun.”

The court heard that Watt will no longer partake in the legal proceedings due to ill health and has withdrawn her witness statement, a development which Sherborne described as a “very dramatic change in this case”.

Tomlinson said his client once believed Watt was not the source of the leaks as “she trusted her friend”, but he added: “The result of all these developments is that Mrs Vardy doesn’t know what to think. She accepts that it is possible that it may be that Ms Watt was the source of some or all of the stories.”