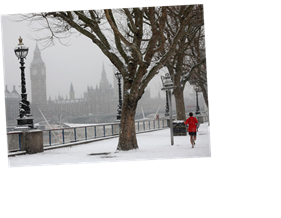 IT could be a white Easter this year as snow is on the way – following a gloriously warm end to February.

The Met Office says tomorrow will see highs of just 6C in London, which will actually feel like just 3C – down from highs of 13C today and yesterday.

Colder spells will grip the UK and are likely to remain until mid March, with Atlantic frontal systems introducing colder and wetter weather than usual for the time of year.