Singapore: On the same day last year that Amanda Eu accepted her offer to study at Monash University in Melbourne, Australia announced it was closing its borders.

“That was quite anti-climactic,” the 20-year-old Singaporean media and communications student said.

Monash University student Amanda Eu is eager to meet her classmates in Melbourne.

In the 18 months since then she has had to instead study remotely from her home in the south-east Asian city-state, one of more than 150,000 student-visa holders unable get to Australia to join their classmates.

Now, with a quarantine-free travel arrangement between Australia and Singapore on the verge of being finalised, she may among the first wave of international students returning to the country.

When he hosted Prime Minister Scott Morrison at Singapore’s presidential palace in June, Singapore leader Lee Hsien Loong had pushed for Singaporean students to be given priority in re-entering Australia whenever the long-awaited travel bubble between the two countries materialised.

That is now taking shape, with Morrison saying the corridor could be established in the next week and fully vaccinated students and business travellers to be the first allowed to fly to Australia.

Eu said it had been difficult to stay motivated during her first year and a half of tuition as she missed the opportunity of an on-campus university experience.

“It has always been a rollercoaster of hope and giving up,” she said.

“It’s going to be my final year and I hope to be able to go back before the semester starts and have a good year in Australia.“

Like 2020, it hasn’t been a good year for Australia’s universities. 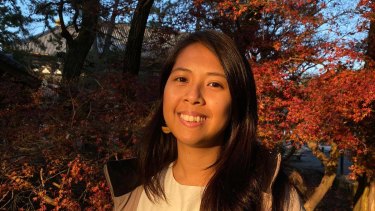 Eos Noelle Louise hopes to complete the final semester of her studies in Melbourne.

Border restrictions have delivered a huge blow to a sector that has relied greatly on fees from foreign students.

Australia’s international standing as a higher education destination has also suffered during the pandemic.

The country’s attractiveness to overseas students has fallen 9 per cent in two years, according to the findings of research released this month by IDP Connect, an arm of global student recruitment agency IDP Education.

The survey placed Australia below Canada, the United Kingdom and New Zealand as a desired study location.

With universities lobbying to get tens of thousands of international students back, the NSW and Victorian governments have announced pilot programs that will allow about 250 per fortnight to return to each state from December.

Singapore only supplies a fraction of the students to Australian universities as China, its biggest source of overseas students, or the likes of India, Nepal and Vietnam. But the deal struck with Morrison by Lee is set to put its students at the front of the queue.

“We have been getting a lot of calls from students asking if they are going to open up,” IDP Education Singapore country manager Raymond Yew said. “I think it’s a welcome move.”

Also welcoming the news from Canberra was Eos Noelle Louise.

The 27-year-old is now looking forward to studying in Australia after completing most of her masters of education in digital learning at Monash at home in Singapore.

“Last year we were told [Australia] might open earlier this year, then there was some news it might open in July.

“I’ve just got a semester left but I do plan on going over.”