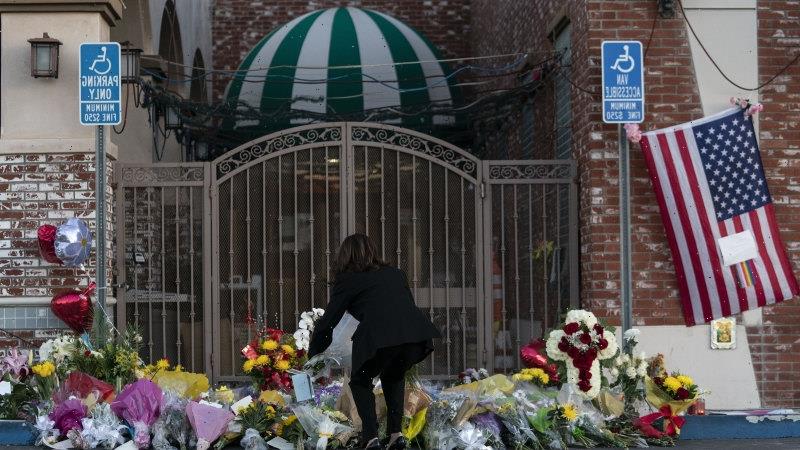 Washington: As someone who has spent the past few decades living in a gun-free Australia, it’s hard for me to get used to the frightening reality of gun-wielding America. 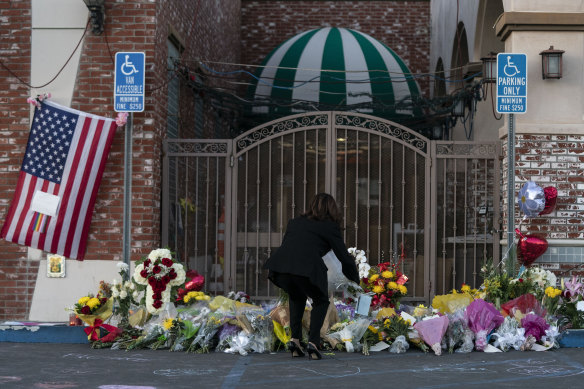 US Vice President Kamala Harris lays flowers at a memorial set up outside Star Dance Studio in Monterey Park, California.Credit:AP

But beyond the political ineptitude are the stories of tragedy you wish you never had to tell, and the feeling of dread you get every time you pack your suitcase to rush to the scene of another heartbreaking massacre.

How many people have been killed and injured? Are there children involved, like the 19 students who were slain in Uvalde last May?

Was it a hate crime, such as the Christchurch-inspired attack by a white supremacist in Buffalo, or the gay club shooting in Colorado Springs?

What was the motive? In the case of the Monterey Park shooting this week, where a 72-year-old gunman opened fire at a dance hall during Lunar New Year celebrations, it’s not always clear.

My first brush with America’s right to bear arms occurred while I was on secondment in 2020 to help cover the election campaign of Donald Trump and Joe Biden.

At a rally on the streets of Minneapolis after George Floyd was killed under the knee of a white police officer, a heated scuffle broke out between Black Lives Matter protesters and Trump supporters.

When the clash escalated into an all-out brawl, one man wearing a “Bikers for Trump” vest exposed a concealed gun he was carrying and threatened to start shooting unless the angry protesters circling him would “back the f–k off.”

I was standing only a few metres away, taking notes for an article. Needless to say, I backed away without a moment’s hesitation.

Since then, there’s been no shortage of examples to remind me of the grim reality of American gun culture.

The closest to home happened near the doorstep of my apartment in Washington DC during last year’s Juneteenth public holiday, which commemorates the emancipation of enslaved African Americans.

It was a Sunday night and the U Street Corridor where I live – one of the district’s hotspots for clubs, bars and restaurants – was buzzing with people when gunshots rang out.

Once the DC Metropolitan Police stopped issuing “active shooter” alerts, I went downstairs to see sections of my usually safe street smeared with blood and cordoned off with police tape. Tragically, a 15-year-old boy was killed and three other people were injured that night, including a police officer. Also, as tragically, the perpetrator was just a kid, also 15.

Figures from the Gun Violence Archive show there were 44,290 firearm related deaths last year, including 647 mass shootings. This year, merely 25 days into January, there have already been 40 mass shootings.

While suicides represent more than half of the nation’s total gun deaths, the Centres for Disease Control and Prevention has warned the rate of gun homicides has risen substantially, increasing by 75 per cent over the past decade and reaching a record high in 2020.

According to the CDC, factors associated with the pandemic, such as job losses, social isolation and mental stress, have contributed to the rise, particularly among minority communities.

“Against the backdrop of the COVID-19 pandemic, the substantial increase in the firearm homicide rate, along with notable increases in firearm suicide rates for some groups, has widened racial, ethnic, and other disparities,” the CDC wrote in a report released last year.

But while gun violence is a sad fixture of American life, the perennial question is what can be done to reverse the trend in a country where so many people fiercely defend the Second Amendment, which enshrines the right to bear arms in the constitution.

It’s a question that has come up repeatedly lately, particularly in California, where 24 people were killed in three separate mass shootings in just over a week.

The first was a suspected gang-related attack in Goshen on January 16 in which six people died, including a 17-year-old mother and her six-month-old baby.

The second was Saturday night’s rampage in the predominantly Asian neighbourhood of Monterey Park when 11 people were killed and nine others injured after a gunman opened fire at the Star Ballroom Dance Studio.

And the third took place on Monday at a mushroom farm and nearby site in the coastal city of Half Moon Bay. Seven people were slain in what authorities described as a tragic case of “workplace violence”.

While the circumstances may differ, the impact is the same. Communities are left heartbroken and helpless, and a nation is left wondering: what will it take to stop the carnage?

One woman I met at the site of the shooting in Monterey Park told me that her nine-year-old son had started asking what it might be like “to live in a place that doesn’t have guns”. Another woman who came to pay her respects that day said she no longer felt safe even going to the gas station.

And California’s Democratic Governor Gavin Newsom lamented America’s status as an outlier when it comes to guns, and he urged his federal colleagues to act.

“Only in America do we see this kind of carnage,” he told reporters.

Newsom is right. The US is the only country in the world where guns outnumber its citizens, with the latest figures suggesting there are an estimated 393.3 million firearms in the country – about 120 guns per 100 people.

The Biden administration tweaked around the edges of reform last year, passing a gun safety bill with the support of 15 Senate Republicans, to strengthen background checks for would-be-gun buyers aged 18 to 21; restrict access to guns by domestic violence offenders; and provide incentives for states to pass “red flag” laws that allow people to petition courts to block guns from people deemed a threat to themselves or others.

But much bigger reforms, such as banning assault weapons or introducing universal background checks, have little chance in the current divided Congress.

Add to that the powerful gun lobby headed by the National Rifle Association, which shapes political decisions by funding and supporting (usually conservative) candidates who have pledged opposition to gun control measures.

The NRA has been noticeably silent of late, but the group generally argues that tackling mental health, fixing the “revolving door” justice system and giving people more guns to protect themselves – but with better training – is the solution.

“Each individual is accountable for his actions,” NRA president Wayne LaPierre said at last year’s general annual meeting in Texas, which took place three days after the state’s worst school shooting in Uvalde.

“There can be no freedom, no security, no safety, without the rights of the law-abiding to bear arms for self-defence.”

Meanwhile, there may be another American mass shooting by the time you read this. And with every awful tragedy, I’m reminded how lucky Australia is to not have the same problem.