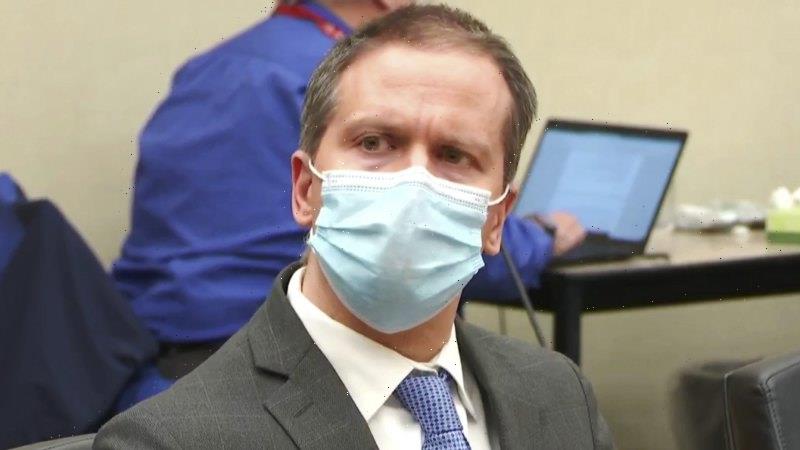 The world met Derek Chauvin, staring ahead impassively with his knee on George Floyd’s neck, through a bystander’s mobile phone video in south Minneapolis.

Yet in the nearly two decades before George Floyd’s death prompted worldwide outrage, Chauvin was a face in the crowd, patrolling the streets during night shifts in the city’s busy Third Precinct. 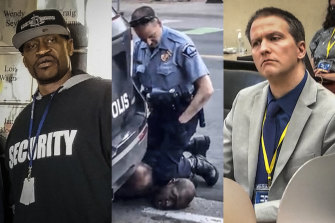 Now found guilty of murder and manslaughter in Mr Floyd’s killing, the fired Minneapolis police officer was an enigma to colleagues and neighbours, and at least one family member who said Chauvin’s behaviour in the video was out of character.

“The number one question I had was, ‘Why didn’t you just get up?’ ” said the relative, who asked not to be named due to safety concerns.

Neighbours said they barely saw Chauvin, discovering he was a police officer only when reporters and protesters showed up in their Oakdale neighbourhood. Former colleagues were confounded by how the unassuming veteran street cop became the city’s most notorious officer.

“He’s not the devil that he’s made out to be,” said Sergeant Joey Sandberg, who retired in 2018. “I don’t know what happened to him. Nobody knows.”

Before pressing his knee into Floyd’s neck on May 25 last year, Chauvin was involved in two other deadly encounters with civilians and two non-fatal police shootings. Yet the 19-year veteran was disciplined just once out of 17 misconduct complaints logged since 2001.

Chauvin had middle-class upbringing. His father is a certified public accountant. His mother stayed home to raise their children. They divorced when Chauvin was young.

After graduating from high school in 1994, Chauvin worked as a prep cook at a McDonald’s and a buffet restaurant. He attended a community college and Metropolitan State University, where his focus shifted to police work.

Chauvin entered active service in the US Army and did two stints in the military police: domestically and in Germany. Jerry Obieglo, stationed in Germany with Chauvin, remembers him as laser-focused on studying to become a police officer. Chauvin didn’t go out drinking and instead volunteered to be the designated driver. 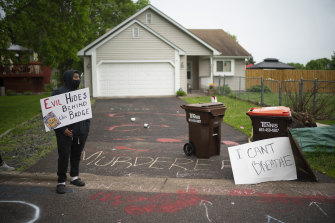 A protester stands outside Derek Chauvin’s house in May, 2020. Credit:Star Tribune

A year later, Chauvin shot Ira Latrell Toles in the abdomen after responding to a domestic-abuse call. Chauvin later told investigators that he had tried to hit Toles in the head with the butt of his handgun because Toles failed to comply with commands, then shot him when he thought Toles reached for his gun. Toles’ ex-girlfriend reported that Chauvin fired his gun “about two seconds” after he entered the bathroom.

“If he was reprimanded for shooting me, then maybe more lives could have been saved,” Toles said in a recent interview.

Kristofer Bergh, was a high school senior in 2013 when he and some friends were driving home after school. They’d been playing a Nerf-gun game, and one of his friends fired a dart out of the car. Seconds later, as they pulled up to Bergh’s home, and two police officers — one identified as Chauvin — came at them, one with his gun drawn.

Bergh said they yelled obscenities and demanded to know who fired the Nerf dart; they stuck his friend in the police car and berated him.

Another complaint was filed by Lasean Braddock, who said police stopped him as he drove home in 2013 from a double shift as a mental health worker.

Braddock said he suspected they had mistaken him for someone else and Chauvin began hitting the window with his torch when he hesitated to get out of the car. Officers tried to force him to the footpath and he went down on his own to avoid injury, he said.

They booked him for failing to comply with police orders and resisting arrest. Prosecutors tossed out the case after watching the video from the police car.

Braddock said he was not surprised to learn that the officer that night was Chauvin. To Braddock, Chauvin was “running around like a loose cannon.” 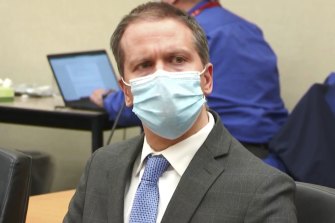 In this image from a video, Derek Chauvin listens to the verdicts at his trial on Wednesday (AEST). (Court TV via AP, Pool)Credit:AP

Chauvin’s peers said he rarely opened up about his personal life. His wife, Kellie filed for divorce after his arrest in Mr Floyd’s death and sought to change her last name.

The two met during one of Chauvin’s shifts, when Kellie, a refugee from Laos, worked at a medical centre.

In July, Washington County prosecutors charged both Derek and Kellie Chauvin with nine counts each of aiding and abetting tax evasion and tax fraud. They are expected to face trial in June.

‘I saw both sides of him’

After his police shifts, Chauvin worked security for bars and restaurants, making $220 to $250 a night — money prosecutors say was not fully reported as income from 2014 to 2019.

Maya Santamaria, former owner of the El Nuevo Rodeo nightclub where Chauvin worked, described him as a “mellow” guy but quick to get aggressive, especially on events that the club marketed to attract black customers.

“I saw both sides of him,” Santamaria said. “Pepper spraying everybody, sometimes using holds that were not apparently the most legal of holds, getting freaked out if there were a lot of black clientele in our club and needing backup right away for no apparent reason.”

In footage of Mr Floyd’s final moments alive, Chauvin appears to lose his cool only when onlookers moved toward him as he knelt on Mr Floyd’s neck.

As Mr Floyd yelled out for his mother and said he couldn’t breathe, Chauvin replied: “You’re doing lots of talking. A lot of yelling. It takes a heck of a lot of oxygen to say that.”

The original version of this story was published in August, 2020