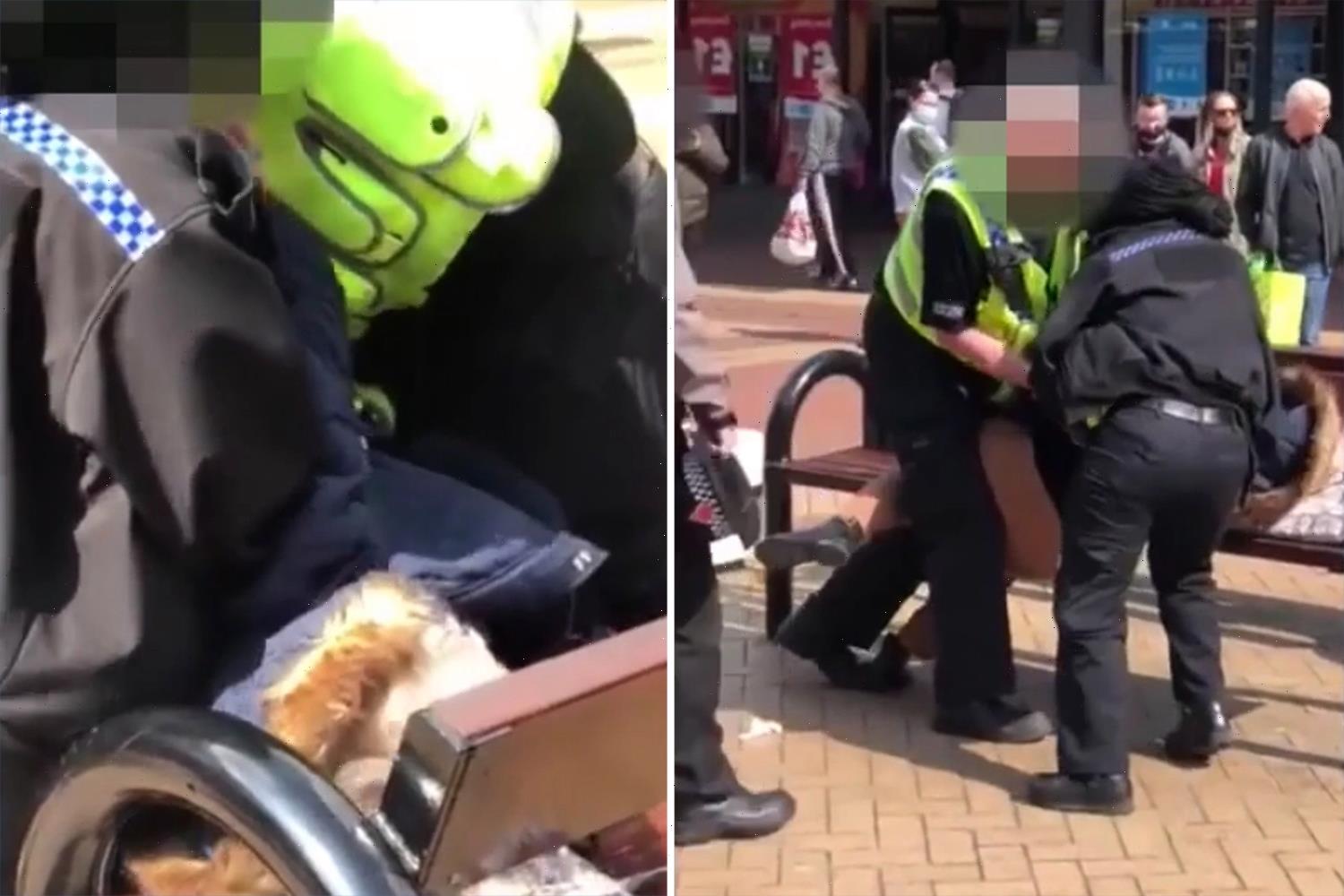 A WOMAN screamed at police "you're breaking my arm" as she was arrested for putting anti-lockdown stickers around a town centre.

And a police watchdog will now probe the incident after video of the arrest went viral on social media. 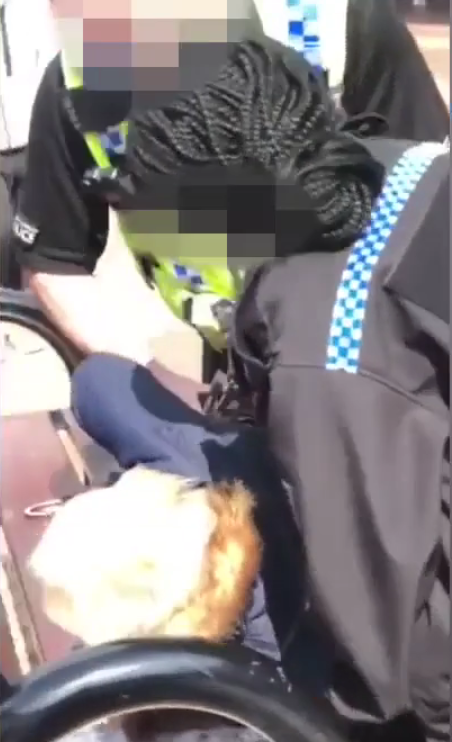 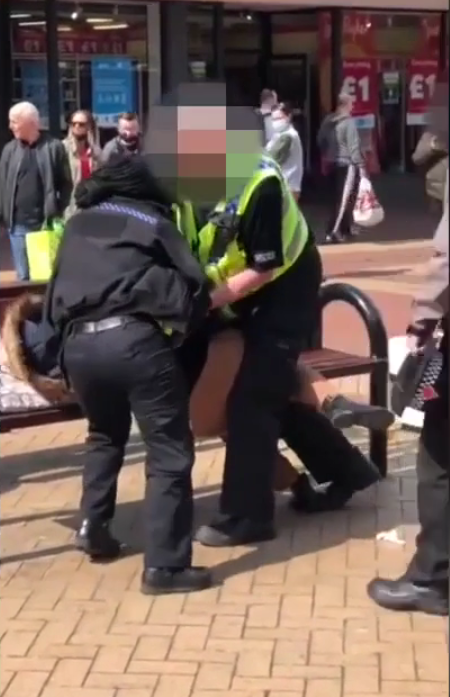 A clip posted onto YouTube over the weekend showed the woman, 69, screaming as cops appear to pin her by her arms.

The officers can be seen holding her on her front against a bench in Wythenshawe, Manchester, with her arms behind her.

Members of the public watching the arrest can be heard protesting, with one woman telling the cops: "Get off her."

The camera then zooms in closer as an officer grapples with the woman and tries to cuff her.

The officer trying to put the handcuffs on replies: "Go away."

A member of the public can be heard saying they've taken one of the officer's shoulder numbers – which are used to identify the cop.

As crowds look on, the arrested woman screams: "Help me."

And as officers stood her upright, she said: "I haven't done anything.

"I was just sitting on the bench."

As she was led away, she told officers: "I haven't done anything wrong."

Greater Manchester Police (GMP) say they arrested the woman on Saturday as officers wanted to speak about her about a previous allegation of criminal damage relating to "anti coronavirus literature being placed around the area". 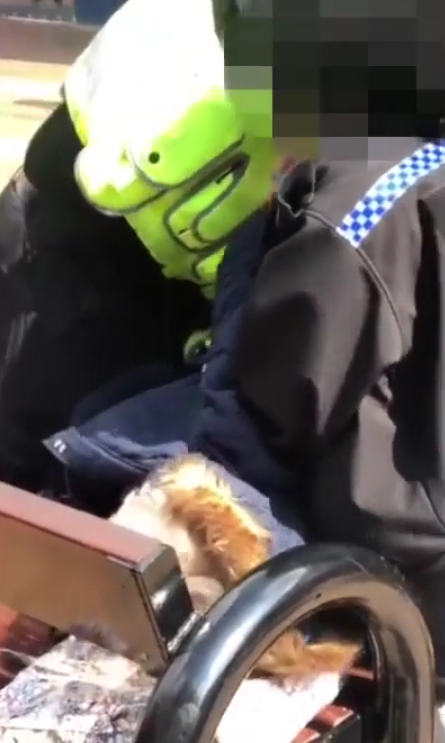 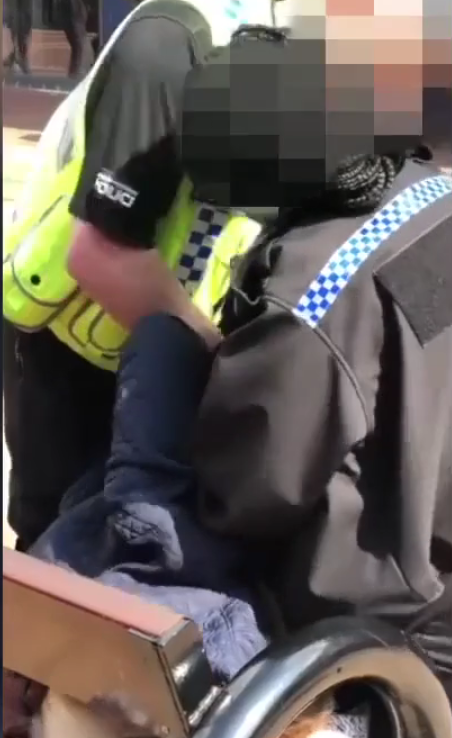 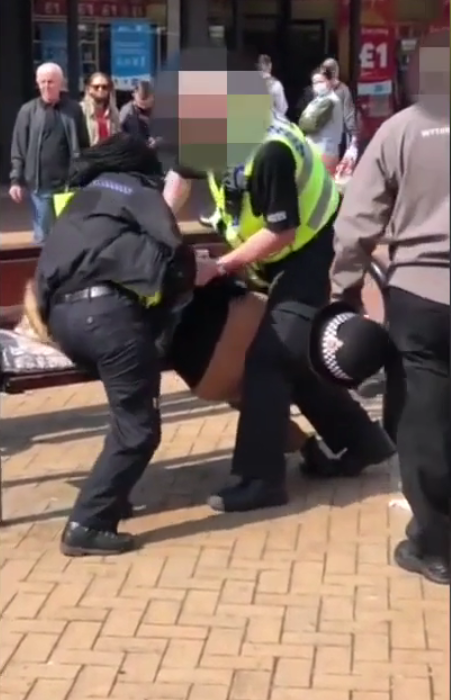 They allege she then failed to give her details and began "resisting arrest".

Speaking to the Manchester Evening News, the woman, who only wanted to be identified as Janie, said she'd put stickers protesting lockdown on bins and billboards in the town.

However, Janie said that when she was told she wasn't allowed to by civic centre security staff, she stopped.

And she accused officers of being "brutal" – and claims she was injured during the incident.

Janie said she refused to give her details to cops when she was approached as she believed she hadn't committed an offence and didn't need to.

But after police warned her she could be arrested if she didn't, Janie says she was "forced onto" the bench.

"I obviously haven't got the flexibility for my arms to be that close together behind my back, which is why I shouting that they were hurting me," she said.

"They then dragged me off the bench.

"At this point I must have gone into shock as I physically couldn't move. Then when a friend came to help me they started on him as well and frogmarched me away.

"By the end there must have been about eight police officers there.

"I cannot believe the waste of resources, all over a 60 year old lady who hadn't committed a crime."

She claims she spent around seven hours in a cell at the police station before eventually being released without charge.

"My right arm and both my hands were swollen. I think it really hit me today as I've had quite a teary day.

"I can't believe how brutal they were. Surely they should be out there catching real criminals.

"I've lost all respect for the police now."

GMP said the incident had been reviewed by a senior officer and had been referred to the force's professional standards branch "for further consideration".