San Diego: The man who assassinated US senator Robert F. Kennedy has been granted parole after two of RFK’s sons spoke in favour of his release and prosecutors declined to argue he should be kept behind bars.

The decision was a major victory for the 77-year-old Sirhan Sirhan, though it does not assure his freedom.

The ruling by the two-person panel at Sirhan’s 16th parole hearing will be reviewed over the next 90 days by the California Parole Board’s staff. Then it will be sent to the governor, who will have 30 days to decide whether to grant it, reverse it or modify it. 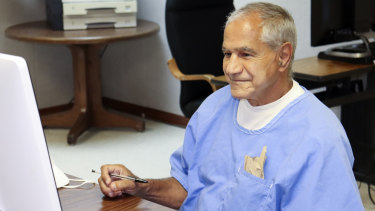 Sirhan Sirhan at his parole hearing on Friday.Credit:AP

Douglas Kennedy, who was a toddler when his father was gunned down in 1968, said he was moved to tears by Sirhan’s remorse and he should be released if he was not a threat to others.

“I’m overwhelmed just by being able to view Mr Sirhan face to face,” he said. “I think I’ve lived my life both in fear of him and his name in one way or another. And I am grateful today to see him as a human being worthy of compassion and love.”

The New York senator and brother of president John F. Kennedy was a Democratic presidential candidate when he was gunned down June 6, 1968, at the Ambassador Hotel in Los Angeles moments after delivering a victory speech in the pivotal California primary. 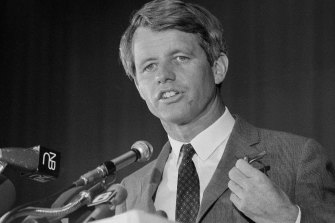 US senator Robert F. Kennedy delivers a speech in 1968.Credit:AP

Sirhan, who was convicted of first-degree murder, has said he doesn’t remember the killing. His lawyer, Angela Berry, argued that the board should base its decision on who Sirhan is today.

Prosecutors declined to participate or oppose his release under a policy by Los Angeles County District Attorney George Gascon.

Gascon, who said he idolised the Kennedys and mourned RFK’s assassination, believed the prosecutors’ role ends at sentencing and they should not influence decisions to release prisoners.

Sirhan, who was in a blue prison uniform with a paper towel folded like a handkerchief and tucked into his pocket, smiled as Douglas Kennedy spoke at the Friday (Saturday AEST) parole hearing. 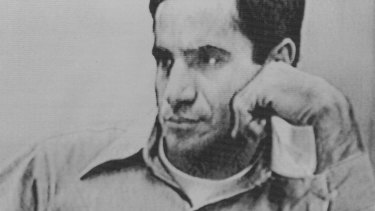 Sirhan Sirhan at a parole hearing in 1982.Credit:AP/File

Sirhan told members of the parole board he had learnt to control his anger and was committed to living peacefully.

“I would never put myself in jeopardy again,” he said. “You have my pledge. I will always look to safety and peace and non-violence.”

Sirhan, a Christian Palestinian from Jordan, has acknowledged he was angry at Kennedy for his support of Israel. He has served 53 years for murdering Kennedy.

When asked about how he felt about the Middle East conflict today, Sirhan broke down crying and temporarily couldn’t speak.

“Take a few deep breaths,” said Barton, who noted the conflict had not gone away and still touched a nerve.

Sirhan said he didn’t follow what was going on in the region but thought about the suffering of refugees.

“The misery that those people are experiencing. It’s painful,” Sirhan said.

If released, Sirhan could be deported to Jordan, and Barton said he was concerned he might become a “symbol or lightning rod to foment more violence”.

Sirhan said he was too old to be involved in the Middle East conflict and would detach himself from it.

Paul Schrade, who was wounded in the shooting, also spoke in favour of his release.

Robert F. Kennedy jnr, who has spoken in favour of Sirhan’s release in the past, wrote in favour of paroling him.

Sirhan was sentenced to death after his conviction, but that sentence was commuted to life when the California Supreme Court briefly outlawed capital punishment in 1972. At his last parole hearing in 2016, commissioners concluded after more than three hours of intense testimony that Sirhan did not show adequate remorse or understand the enormity of his crime.

Sirhan has in the past stuck to his account that he doesn’t remember the killing. However, he has recalled events before the crime in detail — going to a shooting range that day, visiting the hotel in search of a party and returning after realising he was too drunk to drive after downing Tom Collins cocktails.

Just before the assassination, he drank coffee in a hotel pantry with a woman to whom he was attracted. The next thing he has said he remembered was being choked and unable to breathe as he was taken into custody. At his 2016 hearing, he said he felt remorse for any crime victim but couldn’t take responsibility for the shooting.