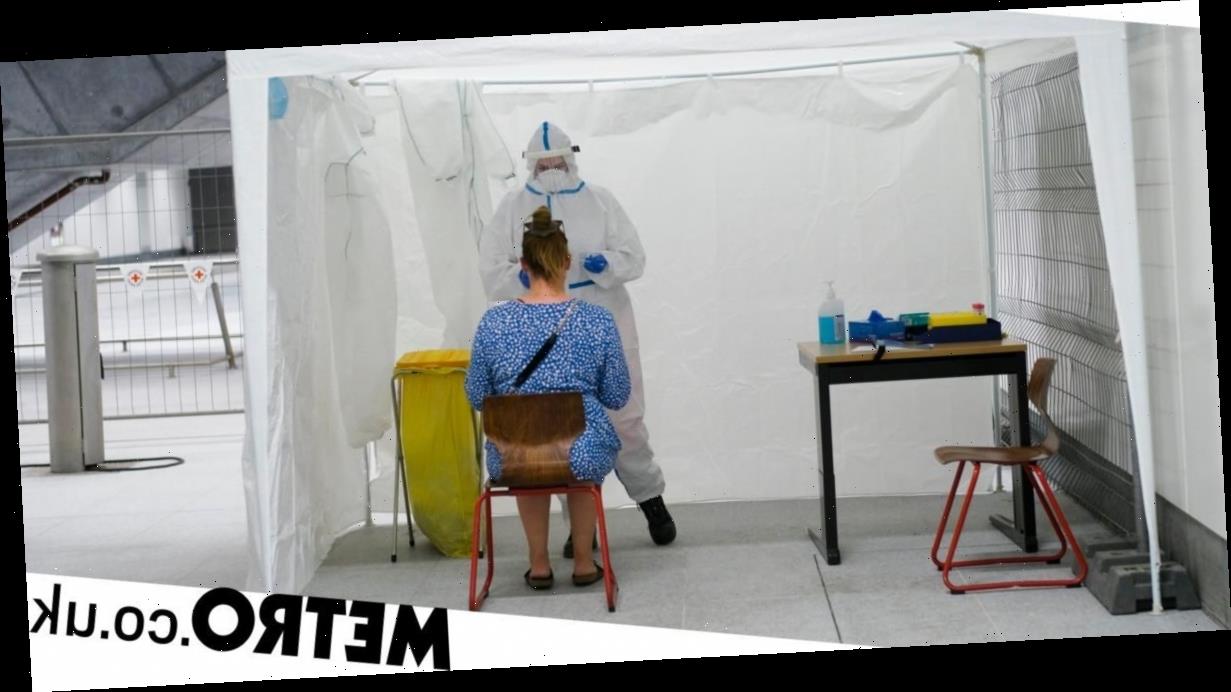 A region in Germany is offering free coronavirus tests at train stations it has that much capacity.

Pop-up testing sites that offer swab tests ‘in five minutes’ are being ran out of Bavaria’s main railway stations, as well as key points on motorways.

Financial Times Frankfurt correspondent Joe Miller tweeted a photo of a facility outside Nuremberg station and joked that ‘they basically have chuggers to convince you to take one’.

He said the test took five minutes while he waited for his train and ‘linked seamlessly to Germany’s contact tracing app’.

It comes after Boris Johnson faced criticism for saying coronavirus infections were higher in Britain than in Italy or Germany because it is a ‘freedom-loving country’.

The PM was being grilled on the UK’s delayed contact tracing app when he was asked by Labour MP Ben Bradshaw if European neighbours have far lower Covid rates than us ‘because their services work’.

Mr Johnson rejected the argument, saying it is ‘very difficult’ to ask Brits to follow rules on social distancing.

Speaking in the House of Commons on Tuesday he said: ‘Actually there is an important difference between our country and many other countries around the world, that is that our country is a freedom-loving country.

‘If you look at the history of this country over the last 300 years, virtually every advance from free speech to democracy has come from this country.

‘And it is very difficult to ask the British population uniformly to obey guidelines in the way that it is necessary.’

His comments were widely ridiculed with many pointing out Germany’s success in getting its testing system up and running at the very start of the pandemic.

One of the first diagnostic tests for Covid-19 was developed at Berlin’s Charité hospital, and the Government acted fast to mobilise the country’s public and private laboratories to rapidly scale up testing capacity.

Experts say this limited transmission in long-term care facilities, resulting in fewer deaths as older people are more likely to get seriously ill or die with the virus.

The UK currently carries out more coronavirus tests a week than Germany, where authorities have moved on from blanket testing to targeting capacity at containing local outbreaks.

Meanwhile soaring numbers of infections in the UK have caused major problems in recent weeks, including people being told to travel hundreds of miles for a test and delays in getting results back.

The UK’s contract tracing app was launched today after months of delays.

By comparison, Germany’s coronavirus tracing app has been downloaded more than 18 million times since its launch in June and has been used to transmit 1.2 million test results from labs to users.

Germany’s app has faced hiccups and the country is starting to see the number of coronavirus cases rise, with restrictions tightened in Munich earlier this week.

However, there hasn’t been the same level of alarm around the rise in cases, which analysts say is linked to how well the country managed to deal with the first wave of the virus.

Other experts say trust in the German government and Chancellor Angela Merkel’s leadership made citizens more likely to follow the rules, compared to the UK where trust has hit an all time low and ministers have been accused of sending mixed messages.

The president of Italy has also hit out at Boris Johnson over remarks the UK’s Covid infection rate was worse than Italy’s because Britons loved their freedom more.

Sergio Mattarella said his citizens ‘also love freedom’ but that they ‘also care about seriousness’.